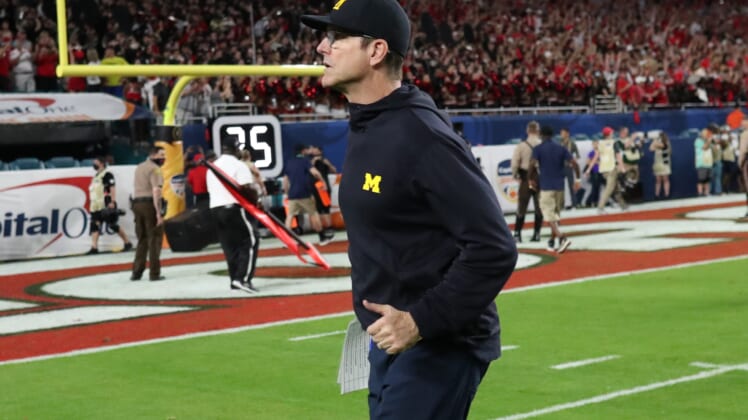 Michigan Wolverines head coach Jim Harbaugh found himself on the hot seat a year ago following a two-win season with the program seemingly getting worse. But coming off one of Michigan’s best seasons ever, the veteran coach is quickly becoming a popular name on NFL radars.

The 58-year-old head coach left the NFL in 2014, opting to coach his alma mater rather than starting fresh with a new pro team. But after delivering three 10-win seasons in his first four years, there seemed to be a level of unrest in Michigan. The Wolverines hadn’t won a bowl game since 2015 and never beat Ohio State in Harbaugh’s first six seasons.

Despite the mixed results in college, NFL teams wanted Harbaugh. But after doing extensive work on him, clubs came away with the impression the iconic coach wanted to remain in college to try and make things worse. That decision paid off, with the Wolverines finally beating Ohio State and later reaching the CFP Semifinal for the first time. 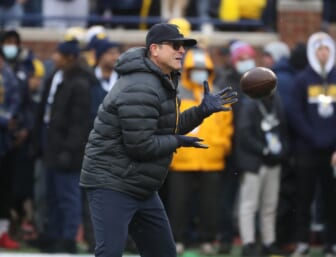 Finally, Harbaugh broke through and delivered the success fans waited years to see. After being unranked in preseason polls, Michigan reached the playoffs as the No. 2 team in the country. Even after the program was destroyed by Georgia in the Orange Bowl, many wondered if Harbaugh could use the success to jump into the NFL.

But even after a crushing defeat, sending the Wolverines to their fifth consecutive loss in a bowl game, Harbaugh made it pretty clear where he plans to be coaching in 2022.

“It was a great season. To me, it’s one of the best seasons in Michigan football, and we were trying to make it greater tonight. It’s still a beginning for this team. It’s where it began last year, and it’ll begin anew this year.”

It doesn’t come as much of a surprise given the success the Wolverines enjoyed in 2021. But there are even more important reasons why Harbaugh is likely staying at Michigan.

The NFL proved to be a draining experience for Harbaugh, largely due to clashes with the San Francisco 49ers front office and ownership. While it’s possible another team would be willing to give him much more control over the 53-man roster to sell him on a return, there’s more incentive to stay at Michigan.

Harbaugh, the reigning AP coach of the year, fell in love with the Wolverines like never before in 2021. He talked in December about this being one of his favorite teams that he has ever coached, relating to the players and falling in love with everyone in the locker room. A big part of it, even with a young roster, was everyone buying into the team’s mission this spring and delivering a level of commitment that made a real difference.

“There’s a lot of things that go into it — but when you’re around a group of guys and you watch them making sure that they give it their best — their very best, every single day,”

Jim Harbaugh on why he loved the 2021 Michigan Wolverines team so much, via MLive.com

This is the same coach who took a pay cut in 2021 to ensure he could remain with the program. When he reached the bonuses in his contract after winning the Big Ten, Harbaugh donated $1 million to employees in Michigan’s athletic department who suffered pay cuts because of the COVID-19 pandemic.

Michigan’s future is also bright with quarterback J.J. McCarthy set to compete for the starting job in 2022. With more support from the fans, boosters and athletic department than ever before, it’s unlikely we see Jim Harbaugh in the NFL anytime soon.