There’s a darn good chance that the Los Angeles Rams will look to pull off a Jalen Ramsey trade at some point this spring.

Ramsey has been the subject of trade rumors over the past few weeks. That was magnified recently with a report from Washington Post NFL insider Jason La Canfora indicating that it’s just a matter of time before Los Angeles trades the All-Pro cornerback.

“It’s a matter of when Rams star cornerback Jalen Ramsey and Arizona Cardinals star wide receiver DeAndre Hopkins are traded, not if. And the GMs I have spoken to don’t believe those teams will get anywhere near the compensation that their fans might expect.”

There’s a lot of factors that go into Rams general manager Les Snead potentially making this trade. First off, Ramsey is set to count a whopping $25.5 million against the cap in 2023. Secondly, Los Angeles finds itself currently $12.35 million over the estimated 2023 NFL salary cap. The Rams are going to have to cut the fat somewhere. Trading Ramsey would do just that.

A five-time Pro Bowl performer, Ramsey regressed a tad this past season. With that said, he’s still only 28 years old and has proven to be among the best cover corners in the league. There’s going to be interest in him. Below, we look at four ideal trade destinations.

If it were up to fans in Cincinnati, Eli Apple would never see the field as a starter again. Despite the Bengals remaining very much alive for a repeat Super Bowl appearance, cornerback is major hole for this team.

Being able to get a true shutdown guy on the outside could set the Bengals up for domination on defense. They have an estimated $49.44 million to spend against the salary cap and all of their draft picks to make a move of this ilk.

Ramsey would have to restructure his contract in order to make a trade work for both the Rams and an acquiring team. After all, Los Angeles would incur a dead cap hit of $32.1 million without a restructure. This certainly puts Cincinnati in play. 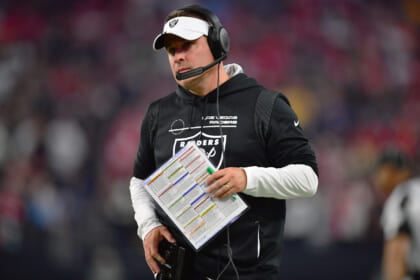 Taking on the likes of Justin Herbert and Patrick Mahomes in the AFC West, this is a major area of concern for general manager Dave Ziegler. In turn, Vegas will have the cap room to pick up Ramsey once it officially moves on from quarterback Derek Carr. Releasing or trading the veteran will result in a $29.2 million cap savings for 2023.

Kansas City Chiefs go all in

How bad was the Chiefs’ pass defense this past regular season? It yielded north of 4,100 yards with 33 touchdowns against 11 interceptions. Defensive coordinator Steve Spagnuolo and Co. were forced to rely on rookies such as Trent McDuffie and Jaylen Watson. While those two have upside, acquiring a proven cornerback makes a ton of sense.

Ramsey had a down season compared to what we saw from him previously. But all of these numbers would have topped Chiefs cornerbacks in 2022. It must also be noted that general manager Brett Veach has not been afraid to pull off blockbuster trades in the past. Offensive tackle Orlando Brown Jr. and edge pass rusher Frank Clark come to mind first.

Despite winning 13 games this past regular season, defense was the Vikings’ downfall. They yielded the second-most passing yards in the NFL at 4,515 for an average of 265.6 per game. Daniel Jones tore this unit to shreds in the Giants’ upset wild card win over Minnesota.

Simply put, the Vikings must upgrade at multiple positions in the secondary. That includes cornerback. The likes of Chandon Sullivan (102.7 QB rating allowed) and Cameron Dantzler (111.1 QB rating allowed) were nowhere near up to the task. Acuiring Ramsey would go a long way in improving this unit.