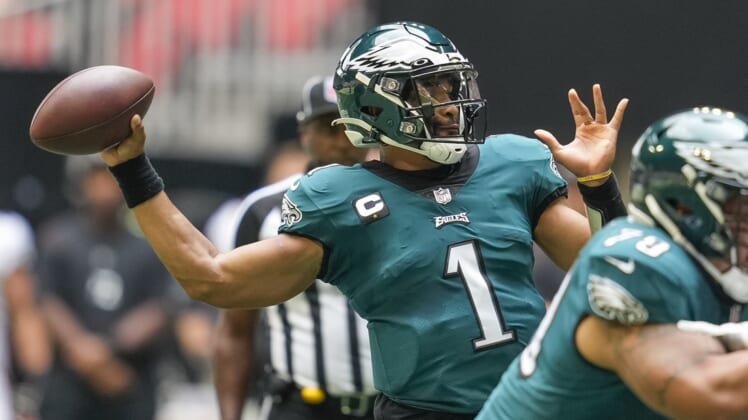 Jalen Hurts passed for 264 yards and three touchdowns to help the Philadelphia Eagles notch a solid 32-6 victory over the host Atlanta Falcons on Sunday afternoon.

Heisman Trophy winner DeVonta Smith caught six passes for 71 yards and one touchdown in his NFL debut, and the Eagles (1-0) outclassed the Falcons (0-1) in a matchup featuring two first-time head coaches in Philadelphia’s Nick Sirianni and Atlanta’s Arthur Smith.

Younghoe Koo kicked two field goals for the Falcons, who had 144 yards of total offense in the first quarter and just 116 over the final three stanzas.

Philadelphia led by nine points at halftime and increased its lead to 22-6 when Gainwell scooted eight yards to cap a six-play, 50-yard drive with 1:25 left in the third quarter.

Atlanta showed few signs of making a comeback and Javon Hargrave’s fourth-down sack of Ryan with 5:38 remaining effectively ended any hopes. The Eagles formally put the game away when Reager caught a receiver screen pass from Hurts and took it 23 yards to make it 29-6 with 4:20 left. 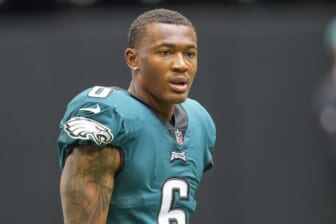 Hargrave again sacked Ryan on fourth down with 3:13 left, and Jake Elliott tacked on a 43-yard field goal with 1:10 remaining as the Eagles finished Sirianni’s first career win in style.

Hurts had 169 passing yards and 37 on the ground in the first half as the Eagles held a 15-6 advantage.

The Falcons opened the game with a 14-play, 72-yard drive but it stalled and they settled for Koo’s 21-yard field goal.

Philadelphia navigated 75 yards on seven plays with its first possession, and Hurts capped it with an 18-yard touchdown pass to Smith with 6:17 left in the quarter.

Atlanta again had a long drive that stalled on its second possession. The Falcons moved 74 yards on 15 plays but it ended with Koo’s 27-yard field goal eight seconds into the second quarter.

The Eagles put together a 12-play, 62-yard drive late in the half with Hurts hitting Goedert with a 9-yard scoring pass with two seconds left. Sanders tacked on a two-point conversion run.