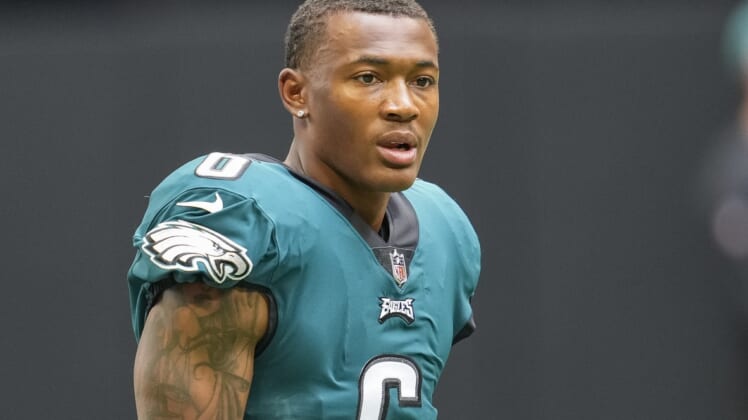 The Philadelphia Eagles wasted no time in their opening offensive possession of the 2021 season, driving right down the field against the Atlanta Falcons, capping the drive with an 18-yard touchdown pass from Jalen Hurts to rookie top-10 pick DeVonta Smith.

Not only is this special because it’s Smith’s first NFL reception and score, but the two used to be college teammates at Alabama. Check out the footage of the reigning Heisman Trophy winner’s scoring grab on a nice touch pass from Hurts:

Hurts was blasted for inaccuracy during his rookie season, and doubted that he could be a starting QB in the NFL. However, he weathered a soap opera controversy revolving around Carson Wentz in 2020, and earned the right to start Week 1 this year.

As for Smith, he’s coming off a national-title winning campaign with Alabama in which he had 117 receptions for 1,856 yards and 23 touchdowns. It seems like the slender, dynamic playmaker has a nose for the end zone that’s translated to the pros very early on.

It remains to be seen whether or not Hurts is the long-term answer under center in Philly, if Nick Sirianni is the right head coach, or whether Smith can get it done at his diminutive size in the NFL. The Eagles’ uptempo start may have just caught the Falcons off-guard.

But as far as first impressions of 2021 go, Eagles fans have to be pretty thrilled about what they saw with Hurts and Smith’s connection.