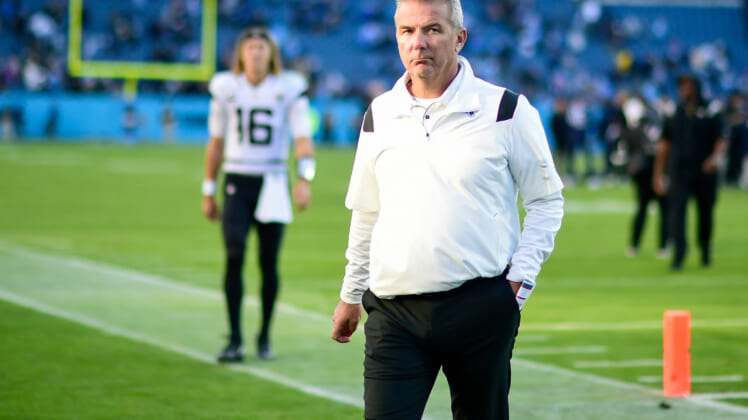 Former Jacksonville Jaguars head coach Urban Meyer lasted in the NFL for less than a year. Now, new first-hand accounts of exactly what transpired in Florida that led to Meyer’s dismissal are coming out.

Jacksonville hired Meyer on Jan. 14, 2021, convincing the legendary football coach to finally make the transition to the NFL. After decades spent coaching student-athletes, Meyer said he spent months preparing for a move to the NFL.

However, it quickly became apparent that he was in over his head. Meyer hired Chris Doyle as the team’s director of sports performance weeks into his new gig. Meyer’s decision came eight months after Iowa dismissed Doyle after multiple players spoke out about him using racist language against them and treating them differently based on their race. After Meyer defended the hire, Doyle resigned a day later.

Meyer’s inexperience with NFL rules also made an appearance early. He didn’t follow the league’s practices protocols months into the job. The NFL fined him $100,000 and the Jaguars $200,000 for holding contact practices during 11-on-11 drills at the team’s OTAs. The Jaguars received a $200,000 fine and must forfeit two OTA practices in 2022.

He still kept running into trouble as a first-year NFL coach. Following his first Thursday Night Football game, Meyer skipped the team flight citing a need to spend time with his family in Ohio. Hours later, a video capture him receiving a lap dance from a young woman at Urban Meyer’s Pint House.

Yet, the Jaguars kept Meyer around even as the losses piled up. However, things changed in December after NFL Network’s Tom Pelissero reported on Meyer’s clashes with his own coaches and players. On Dec. 15, former Jaguars’ kicker Josh Lambo said Meyer kicked him before a preseason game and Jacksonville axed its coach shortly after.

As part of The Athletic’s reporting, Sando and Jenks spoke to multiple Jaguars’ players and coaches who were with the team during Meyer’s tenure. One thing that is evident based on the first-hand accounts from inside the building, Meyer seemingly used threats and intimidation to try and motivate those around him.

One example reportedly happened in August. A player missed his assignment during the preseason game and it resulted in a busted play. It enraged Meyer, causing him to react on the sideline. He remained irate a day later and told players during a meeting he would end their NFL careers if it happened again.

“And do you know what would happen if I cut you guys? You couldn’t get a job paying more than $15 an hour.”

Urban Meyer’s message to players after a preseason game, via four first witnesses (The Athletic)

A head coach threatening to cut numerous players isn’t unprecedented. However, Meyer’s implication that none of the men he would cut are capable of anything more than playing football was an offensive suggestion. As one veteran told The Athletic, it immediately cost Meyer respect for some.

The atmosphere became unlike any other, with Meyer regularly yelling at team personnel and making it clear he could fire them for any mistake and players weren’t alone. A member of the Jaguars’ football operations staff told The Athletic that it was “the most toxic environment I’ve even been a part of. By far. Not even close.”

D.J. Chark, who left the Jaguars in free agency, said he believes Meyer operates under the idea that threats are motivating. However, he knew some players he couldn’t cut. When Chark made a mistake, he told The Athletic that Meyer would fire the receivers coach even if that coach was right by them.

“You’ve got players in fear that they’re going to lose their jobs. You’ve got coaches who he belittled in front of us, and I can only imagine what he was doing behind closed doors. I’m surprised he lasted that long, to be honest with you.”

Meyer also tried to hold live contact drills during training camp, even when veteran coaches and players objected. During a blocking drill, Chark suffered a broken finger during a period when Meyer insisted on the receiver doing extra reps.

However, it’s not the most troubling thing Meyer is accused of during his tenure.

Veteran wide receiver John Brown signed with the Jaguars on Nov. 8, providing the team with depth at the position. During his short stint with the team, he found himself on the receiving end of Meyer’s rage.

The 31-year-old receiver ran the wrong route during a practice drill. After realizing his mistake, Brown spent time with quarterback Trevor Lawrence after practice to correct the issue. As the teammates went over the route, Meyer addressed Lawrence.

“Hey, Trevor, you’ve got to slow it down for him. These boys from the South, their transcripts ain’t right.”

Urban Meyer to Trevor Lawrence regarding Florida native John Brown, via The Athletic

The implication that Southern players, with Meyer referring to men, as slower mentally and mocking their intelligence didn’t sit well with those who heard it.

Meyer’s anger and desire to berate players didn’t work well for those on the receiving end. It had an even stronger impact on one unnamed player, who was scolded so harshly in front of his teammates that it left him in tears.

For a coach who claims he spent months preparing for the NFL, those around him seemingly didn’t see it. One issue cited by multiple players and coaches, Meyer was unfamiliar with some of the NFL’s biggest stars and that included Aaron Donald.

Urban Meyer to Jaguars’ staffer during 2021 season, per The Athletic

Between that and Meyer’s criticisms of NFL scouts, calling them “lazy”, it quickly became apparent to those in Jacksonville that Meyer wouldn’t last long in the league. Sure enough, he was fired and his coaching career is likely over.