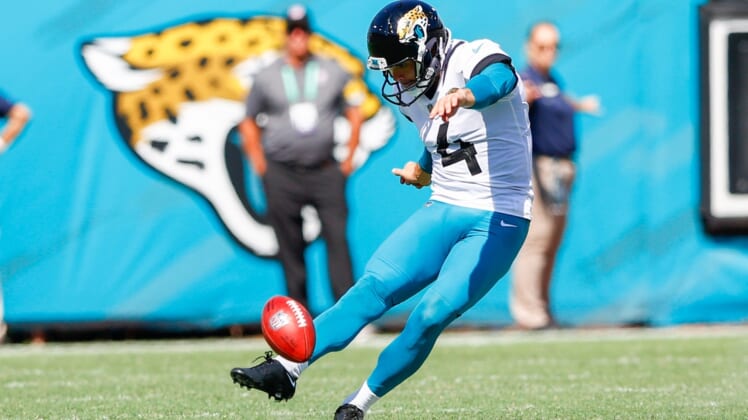 In an interview published Wednesday in the Tampa Bay Times, Lambo said he was working out in August before the final preseason game against the Dallas Cowboys when Meyer walked his way, then addressed him without using his name — customary, apparently, for Meyer when talking to the specialists.

“It was ‘Kicker, Punter, Long snapper,'” Lambo said. “Or S–tbag, Dips–t or whatever the hell it was.”

As Lambo went through stretches, Meyer kicked him, he said.

“I’m in a lunge position. Left leg forward, right leg back,” Lambo said. “… Urban Meyer, while I’m in that stretch position, comes up to me and says, ‘Hey Dips–t, make your f–king kicks!’ And kicks me in the leg.”

“It certainly wasn’t as hard as he could’ve done it, but it certainly wasn’t a love tap,” Lambo, 31, said. “Truthfully, I’d register it as a five (out of 10). Which in the workplace, I don’t care if it’s football or not, the boss can’t strike an employee. And for a second, I couldn’t believe it actually happened. Pardon my vulgarity, I said, ‘Don’t you ever f–king kick me again!’ And his response was, ‘I’m the head ball coach, I’ll kick you whenever the f–k I want.'”

The Jaguars released Lambo Oct. 19 as his slump continued.

It’s the latest black mark for Meyer, with reports surfacing in the past week that he got into a shouting match with wide receiver Marvin Jones after criticizing the receivers group and called members of his coaching staff “losers.”

This follows an incident in October when he was seen on videotape with a young woman, who wasn’t his wife, dancing close to him. A second video, released later, appeared to show him touching her bottom.

After Sunday’s 20-0 loss to the Tennessee Titans, Meyer denied calling his coaches losers, and he downplayed the incident with Jones. He said anyone who was leaking information would be fired.

Jones himself told reporters Wednesday that the run-in with Meyer was in the past.

“I would just say this: There was something that was brought to my attention I didn’t like too well,” Jones said, per Jaguar Report. “I approached him about it, and we talked. And we handled it like grown men. That’s I have to say about that.”

The veteran Jones, who is in his first season with the Jaguars, added: “We have a lot of conversations, me and (Meyer) about this team. I’m the old head, I’m the voice of the locker room.”

It’s been a frustrating season for Meyer. The Jaguars are 2-11, losing more games than Meyer dropped in seven seasons at Ohio State, where he was 83-9 from 2012-18.

“Josh’s characterization of me and this incident is completely inaccurate, and there are eyewitnesses to refute his account,” Meyer, 57, said. “(General manager) Trent (Baalke) and I met with him on multiple occasions to encourage his performance, and this was never brought up. I was fully supportive of Josh during his time with the team and wish him nothing but the best.”

Lambo, who began his career with the Chargers in 2015, joined the Jaguars before the 2017 season. He missed five kicks in Jacksonville’s first three games: three field goals and two extra points.

Lambo was successful on 76 of 80 field-goal attempts (95 percent) in parts of four seasons with Jacksonville prior to Meyer’s arrival.

Now a free agent, Lambo said he is speaking out now out of loyalty to those in the organization.

“There’s been a lot of turnover, but those are still my people,” he said. “Some of those dudes are my dudes, and the staff members I have grown into amazing relationships with over the last five seasons. He threatened all of them for speaking the truth. And that’s a bully, and people need to speak up against bullies.”