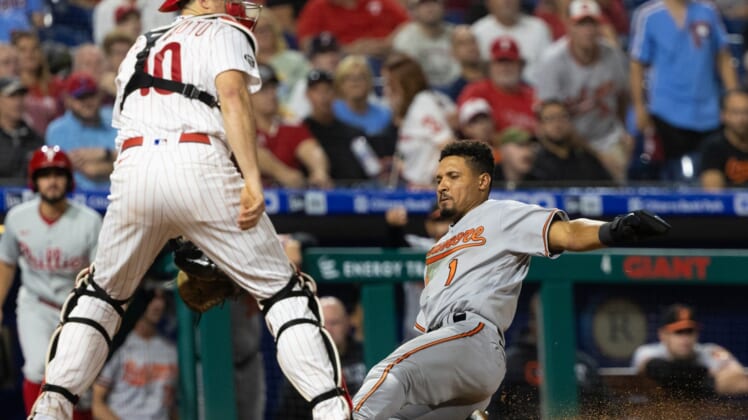 J.T. Realmuto hit a walk-off two-run double with two outs in the bottom of the 10th inning to lift the host Philadelphia Phillies past the Baltimore Orioles 3-2 on Tuesday.

Realmuto, Bryce Harper, Andrew McCutchen and Freddy Galvis each had two hits for the Phillies, who avoided a three-game losing streak at a crucial juncture. The Phillies (77-74) began the night three games behind the Atlanta Braves for first place in the National League East.

Adonis Medina started for the Phillies in a bullpen game and allowed four hits and one run in 3 2/3 innings. He struck out three with two walks. Closer Ian Kennedy (3-1) earned the win, throwing two innings and giving up one unearned run.

Austin Hays hit an RBI double with one out in the 10th inning to temporarily give the Orioles a 2-1 advantage.

Connor Greene tossed a scoreless first before being replaced in the Orioles’ bullpen game.

Cesar Valdez (2-2) took the loss after allowing the triple to Realmuto.

The game remained scoreless through the first three innings as the Orioles and Phillies each had three hits.

Baltimore went ahead 1-0 in the fourth when Ramon Urias lined an RBI single to center.

In the sixth, Richie Martin reached first on a force play after a Valaika single and with two outs Kelvin Gutierrez advanced to first on an error by Didi Gregorius. Thomas Eshelman, a relief pitcher, grounded out to end the threat.

Realmuto doubled with one out for the Phillies in the bottom of the sixth. Brad Miller then struck out looking and McCutchen responded with an RBI double to tie the game at 1. Gregorius flied out to center to end the inning.

Galvis singled and moved to second on a sacrifice bunt by Ronald Torreyes in the seventh. But Odubel Herrera struck out and Jean Segura grounded out.

Valaika broke his bat but still grounded into a 5-4-3 double play to complete the Baltimore eighth.

Harper opened the bottom of the eighth with a double and Realmuto grounded out to advance Harper to third. Pinch hitter Matt Vierling grounded out to a drawn-in infield at second, but Harper was thrown out easily at home. Vierling went to second on a wild pitch and McCutchen popped out to shortstop.