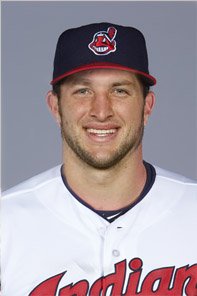 News surfaced Tuesday morning that former NFL quarterback Tim Tebow might be looking to try his hand in professional baseball.

Needless to say, the news from ESPN’s Adam Schefter was met with some rather hilarious responses around the social media world.

Insert jokes about Tebow attempting to toe the rubber as a pitcher after struggling with accuracy during his short-lived NFL career.

One Major League Baseball team certainly understands what social media should be used for. That team, the Cleveland Indians, did the best possible troll job surrounding the Tebow news Tuesday morning.

Attempting to backtrack, the Indians then posted this.

You simply have to love when a social media team finds the best possible way to take advantage of an otherwise hilarious situation.

As it relates to Tebow’s baseball aspirations, they seem to be real.

“For almost the past year, Tebow has been training in Arizona and Los Angeles to hone his hitting and fielding skills in a sport he has not played on a full-time basis since 2005,” Schefter reported. “Tebow was an All-State baseball player in Florida that year and hit .494 as a junior, helping Nease High School reach the final four of the Florida state playoffs.”

Tebow’s agent, Jimmy Sexton, confirmed his client’s interest in taking to the baseball diamond. Whether that eventually happens, no one really knows.

If so, Maybe the Indians will come calling.