Indianapolis Colts general manager Chris Ballard looks to be open to a reunion with veteran TY Hilton. However, when it comes to reuniting new quarterback Matt Ryan and Julio Jones, not so much.

Ten-year Colts veteran TY Hilton still does not have a team for the 2022 season. Yet that isn’t necessarily surprising despite being a four-time Pro Bowler. Over the last three seasons, the 32-year-old’s stats have seen a significant decline. Plus, staying on the field has also been an issue in that time as well.

Last season, Hilton only played in 10 games due to various injuries, including to his neck and a Week 8 concussion. There is certainly evidence that his best days are well behind him. However, during a Tuesday press conference, the team’s general manager revealed that Hilton is still “in the mix” to join budding star Michael Pittman, Jr., second-round pick Alec Pierce, and veteran Parris Campbell in the receiving corp.

Yet, while the organization is open to bringing back the player they took with the 92nd pick in the 2012 draft, they don’t seem as interested in a former superstar many have speculated could join the team.

Since being released earlier this year by the Tennessee Titans, observers of the sport have wondered if two-time All-Pro Julio Jones might be a perfect fight for the Colts. Especially since their new starting QB forged a legendary duo with Jones during 10 seasons together with the Atlanta Falcons.

Unfortunately for fans of the Ryan and Jones duo that took the Falcons to the Super Bowl in 2017, Ballard quickly shut down the idea of Jones joining the Colts’ receiver corps. “I know there’s reports out there, but those reports are wrong,” Ballard told the media on Tuesday. 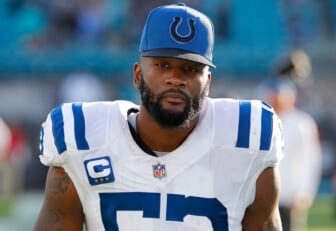 Jones has also seen a steep decline in his production over the last two seasons, however, he is only one year older than Hilton and has one of the best wideout resumes of the last 15 years.