Andrew Luck belongs in the Indianapolis Colts’ Ring of Honor

Bob Kravitz of The Athletic wrote an article about former Indianapolis Colts quarterback Andrew Luck belonging in the Colts Ring of Honor. For those unaware, this is basically the Colts Hall of Fame.

Due to this writing Andrew Luck is trending on social media once again. This isn’t too surprising. With the current state of affairs in America, few things are shocking to me. However, what is shocking is the reasons why fans don’t think he should be in.

The majority of the reasons as to why not stems from Luck’s abrupt and unexpected retirement. You know, the one that happened three years ago this August. Yes, it was shocking and gut-wrenching and handled in the absolute poorest way possible. The timing and optics of it all, Luck smiling and warming up prior to kickoff of a home preseason game. It’s all bad.

It is a perfect example of how not to retire. Most importantly, I had just completed my fantasy football draft a week prior with Luck as my starter and no backup. So, losing him really messed up my team and season. I dare say it cost me a championship. But I digress.

There was even one local TV sports reporter who stated he and his colleagues have talked about this very topic and came to the conclusion that because Luck didn’t play long enough. Hence, Luck doesn’t belong. These are all wrong and contradictory to some of the current ROH members. The fact is Andrew Luck absolutely 100% belongs in the Colts’ ROH. He was in the NFL for seven seasons, playing in six of them. He missed one season due to injury. He was among the best signal callers during that span.

That’s longer than current ROH member Jim Harbaugh was with the Colts. And being in the HOF or ROH is all based on the player’s stats.

I can’t think of a single player out there who isn’t in a HOF or ROH because they made a bad mistake off the field and still didn’t get in. Terrell Owens comes to mind, but his antics didn’t get keep him out of the HOF. His on-field production is one of the best in the history of the NFL. Some other examples of Luck retiring early are Barry Sanders and Calvin Johnson. Both are HOF members and both left Detroit way sooner than anyone expected.

Andrew Luck was the perfect quarterback creation. I mean if you were to take parts of every great QB in history and put them together the end result is Andrew Luck. He stood tall and was hard to bring down in the pocket like Ben Roethlisberger.

His 40-yard dash time is the same as Cam Newton. And both are about the same size in stature. Luck is 6-foot-4, 234 pounds and Newton is 6-foot-5, 245 lbs. Luck found ways to come back and win games his team probably shouldn’t have like Joe Montana. He could do it all on the field.

Something that was incredibly different about him was the fact that he played QB as if he was a linebacker. Luck loved taking hits in the pocket. And if his line was doing a good job of protecting him, he’d ask a teammate to hit him. Yeah, you read that right. If he threw an interception he felt it was his duty to go and tackle that defender. And we’re not talking about going for the legs or something. We’re talking full-on form tackling of the guy.

On top of that, here’s some stats to drive home this point and the reason why Andrew Luck belongs in the ROH. 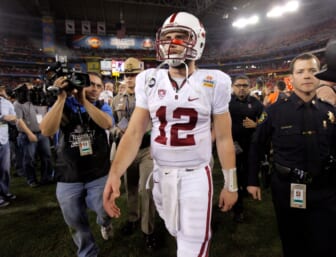 So if Harbaugh makes it in, then Luck, who was far superior, should be in as well. And it’s not a matter of if he belongs but more what date and game will it be. His on-field work speaks for itself and leaves no doubt that he is without question belonging in the Colts Ring of Honor.