Carson Wentz returned to practice, but the Indianapolis Colts quarterback was merely an observer on Tuesday morning.

Wentz wore a red no-contact jersey, shorts and cleats — not a protective boot — eight days after the Colts said he needed surgery to remove a bone from his left foot.

Wentz is roughly four weeks from the earliest possible return date, based on the initial recovery timeline of 5-12 weeks the team provided. 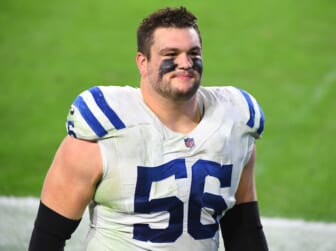 Without Wentz, who was acquired from the Philadelphia Eagles in the offseason, the Colts are using Jacob Eason, Brett Hundley and rookie Sam Ehlinger at quarterback.

All-Pro left guard Quenton Nelson, who had the same foot surgery as Wentz this month, was also at Tuesday’s practice.