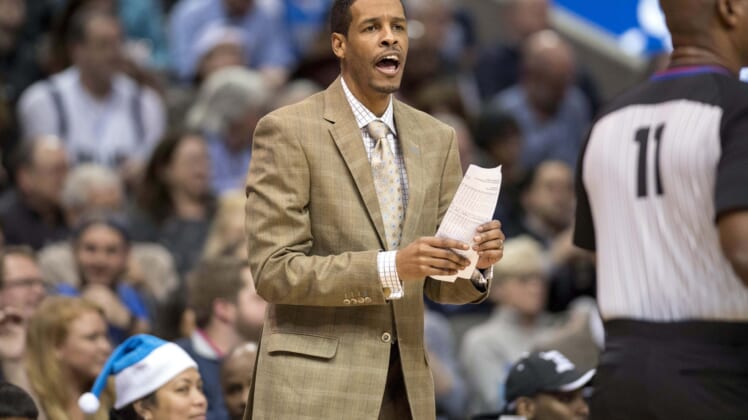 Dec 12, 2018; Dallas, TX, USA; Dallas Mavericks assistant coach Stephen Silas yells to his team during the second half against the Atlanta Hawks at the American Airlines Center. Silas takes over for head coach Rick Carlisle (not pictured) who was ejected in the third quarter. Mandatory Credit: Jerome Miron-USA TODAY Sports

The Houston Rockets are in the midst of a major shake up following their early exit in the 2020 NBA Playoffs. That included head coach Mike D’Antoni stepping down. The Rockets are now making some major news on that front, hiring Stephen Silas to be their next coach.

In what has to be considered pretty shocking news, the Rockets passed up on former head coach Jeff Van Gundy. He was seen as the odds-on favorite for this job. Instead, the Rockets go with an inexperienced Silas to help the team turn the corner.

Houston Rockets hire Stephen Silas to be next head coach

As ESPN’s Adrian Wojnarowski later noted, the Rockets were high on Silas due to his past experience working with both Rick Carlisle and Steve Clifford. His father, Paul, was also a longtime head coach in the NBA.

Silas, 46, has been an NBA assistant since 2000. He’s coached multiple teams during that span.

That’s a lot of experience without being given a head-coaching job. Silas’ experience is more on the offensive end of the court than on defense. That included him working with stud young guard Luka Doncic in Dallas.

It’s also now readily apparent that the Rockets valued Silas’ upside as a young coach over Van Gundy’s experience. Time will tell whether that was a smart decision.