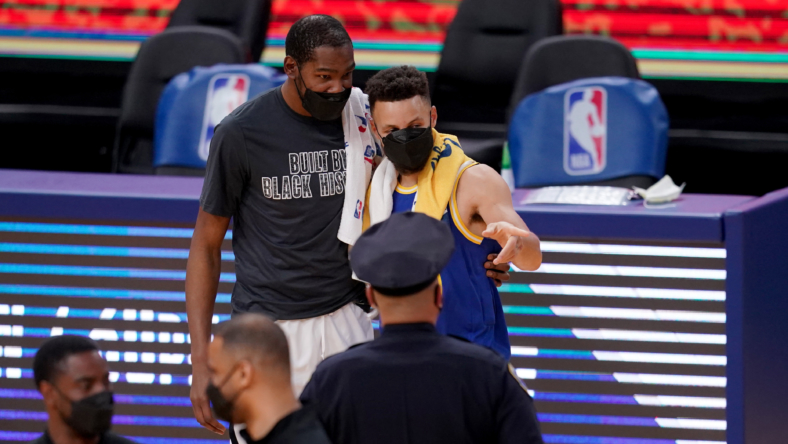 Kevin Durant and the Brooklyn Nets are coming off an embarrassing 32-point loss to the Sacramento Kings. It’s a game that saw them yield 153 points. Kyrie Irving didn’t suit up due to his suspension. Ben Simmons came off the bench again. It was just brutal to watch one of the game’s best talents go down in that manner.

Having just recently fired head coach Steve Nash and with the team once again embroiled in drama, KD just recently opened up about his decision to request a trade this past summer.

“It wasn’t difficult at all to request a trade because it was about ball,” Kevin Durant on trade request, via Bleacher Report. “I went to them and was like, ‘Yo, I don’t like how we are preparing. I don’t like shootarounds. I like practices. I need more. I want to work on more s***. Hold me accountable. Get on my ass in film if that’s going to help you get on everybody else’s head. I want to do more closeouts. I want to work on more shell drills at practice.’

About that? The Nets find themselves at 6-9 on the season. They are going nowhere fast. From a practical standpoint, it actually makes sense for Durant to renew his trade request. He’s in the latter stages of his prime. The Nets are done as contenders. He’s wasting away in the Big Apple. It’s not a situation we want to see someone of his ilk to be in. It’s in this that we also renew our look at potential landing spots ahead of February’s NBA trade deadline.

There’s been a lot of talk about Dallas showing interest in Durant. It makes sense in that teaming him up with Luka Doncic would make the Mavericks a legitimate title contender. General manager Nico Harrison has to consider this possibility if KD is put on the market.

In this scenario, Brooklyn adds two young guards in that of Green and Hardy to help start anew with a rebuild. It also picks up two veteran contracts, Hardaway Jr. and Bertans, who could be moved down the road for more draft assets. Add in two future unprotected first-round picks, and this could make a ton of sense for the Nets.

With Sacramento off to a surprising 7-6 start to the season and looking to end the NBA’s longest playoff drought, we wouldn’t be surprised if GM Monte McNair made another bold move.

The Kings added Domantas Sabonis to team up with star guard De’Aaron Fox at the NBA trade deadline this past February. In the process, it gave up youngster Tyrese Haliburton. Why not entice Brooklyn with a potential franchise cornerstone in Murray in order to add KD to the mix?

As for Murray, he is among the best yong stars in the game. The rookie No. 4 pick is averaging 12.0 points and 3.7 rebounds on 38% shooting from distance in his first 12 NBA games. He would be a building block for Brooklyn. Adding an expiring contract in that of Barnes could also net Brooklyn more draft assets in addition to these two future unprotected first-round picks.

In this scenario, the Nets opt against adding future first-round picks and decide to retool on the fly. Adding former lottery picks in that of Davis and Avdija could help expedite things. Heck, Kuzma could net Brooklyn a nice amount of draft capital in a seperate trade. As for Porzingis, he’s returned to pre-injury form and could end up being a centerpiece in a return to the Big Apple.

This would be a lot for Washington to give up. But the team owes it to recently-re-signed Bradley Beal to build a legitimate contender. Adding a hometown boy in that of Durant would be just the tonic this underperforming team needs.

Kevin Durant back to the Golden State Warriors

There was talk this past summer about Durant potentially returning to the Bay Area where he won two NBA Finals MVPs with the Warriors. At this point, it almost makes too much sense. Golden State has struggled to open the season and has not found a No. 2 option behind the legendary Stephen Curry. Durant would more than provide that for the Warriors that while elevating Jordan Poole to the third option.

As for the Nets, they add three recent first-round picks to the mix. In particular, Kuminga could end up being a building block for the team. Two future unprotected first-round picks as well as Green’s contract could also be a boon from an asset standpoint. Even if Green picks up his option for next season, it would soon become valuable as an expiring — potentially netting Brooklyn another first-round pick and change.