Kings knock out Nets from deep 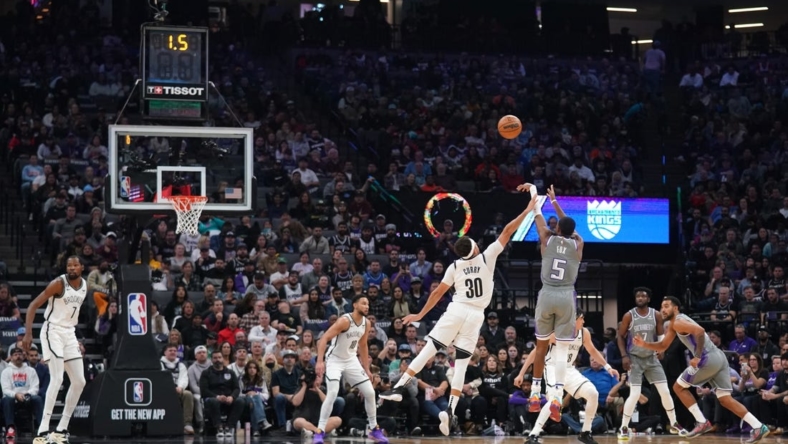 Terence Davis amassed a game-high and season-best 31 points off the bench and teamed with Kevin Huerter for 12 of Sacramento’s 20 3-pointers Tuesday night, propelling the Kings to a 153-121 thrashing of the visiting Brooklyn Nets.

Huerter finished with 19 points, Domantas Sabonis 17, Harrison Barnes 16, Malik Monk 15, De’Aaron Fox 14 and Trey Lyles 12 as the Kings won for the fourth straight time after a 3-6 start to the season.

The 153 points were the most scored by a Kings team since 154 against the Philadelphia 76ers in January 1993.

Kevin Durant used 11 free throws to put up a team-high 27 points for the Nets, who lost a second straight after opening a three-game California swing with a victory over the Los Angeles Clippers.

Brooklyn pulled into a 40-40 tie in the third minute of the second period before Davis connected on two 3-pointers, a short jumper and a dunk in a 14-0 flurry that put the visitors behind for good.

Riding the momentum of a 122-115 home win over the defending champion Golden State Warriors on Sunday, the Kings led by 25 in the first half, then 115-82 by third quarter’s end.

Davis’ point total was the product of 12-for-16 shooting and 7-for-10 on 3-pointers. He also found time for a game-high nine rebounds and three steals.

Huerter buried 5 of 7 3-point attempts, helping the Kings to a 60-33 advantage in points from beyond the arc.

Fox also dished out a game-high nine assists, while Sabonis complemented his 17 points on 6-for-6 shooting with seven assists and seven rebounds. The Kings outshot the Nets 60.2 percent to 49.4 percent.

Durant was a one-man show in his 31 minutes for the Nets, who were still missing suspended Kyrie Irving. Durant outscored his closest teammate (Edmond Sumner) by nine points and had six of Brooklyn’s 25 assists and four of its 29 rebounds.

Coming off the bench, Ben Simmons led the Nets with five rebounds to go with 11 points. Cam Thomas added 12 points and Yuta Watanabe 11.

The 153 points allowed equaled the second-most in Nets history. Playing then in New Jersey, the Nets lost 161-157 in two overtimes to the Phoenix Suns in December 2006.