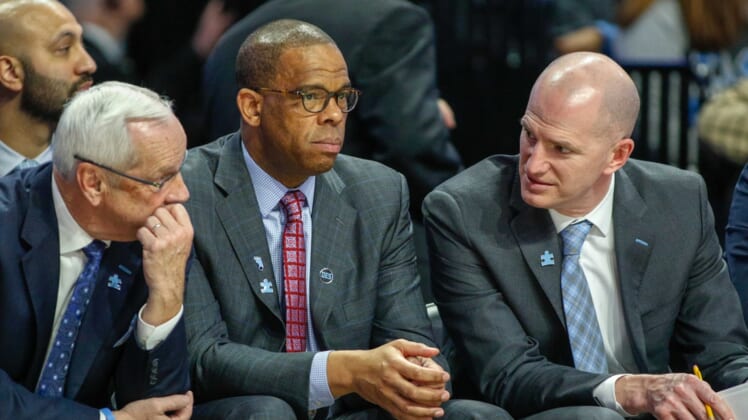 The addition of Sean May, Jeff Lebo and Brad Frederick means the top four coaches in the program all will be North Carolina alums for the first time.

May and Frederick are holdovers from the staff of Roy Williams, who retired earlier this month.

Davis also added Jackie Manuel as director of player and team development. Manuel played with the Tar Heels from 2001-05.

“I wanted a staff that went to North Carolina and played at North Carolina,” said Davis, who coached under Williams. “I think you have a great opportunity to do this job well if you’ve experienced it as a player. It’s not the only way, of course, but given there are so many former players who are coaching, it’s a great way to build my first staff as the head coach.”

Davis said it was important to him that each coach have a connection with Williams, legendary coach Dean Smith, or his successors — Bill Guthridge and Matt Doherty.

He said his staff “connects each of the former head coaches’ personalities to our current team, which was a huge incentive for me in constructing this staff. Carolina Basketball is all of them and I wanted a staff that had that diversity of experiences to give the most to our players.”

Davis said Steve Robinson, who worked with Williams for 18 years, will not be returning to the staff, nor will Kendall Marshall.

May, 37, played for the Tar Heels from 2002-05 and was named the Most Outstanding Player of the Final Four in 2005, when the program won the first of three national titles under Williams.

“The University of North Carolina means everything to me,” he said. “I played here, I won a championship here, it’s where I decided to learn the other side of basketball when I joined Coach Williams’ staff six years ago. Now I have an opportunity to do what I am passionate about, which is teach the game of basketball and help our players have what my coaches brought to me — an unbelievable experience. I am really fortunate to have an opportunity to do that at the place I love.”

Lebo, 54, has 20 years of head coaching experience, including six seasons at Auburn. He was the captain of the Tar Heels in 1989, when he played with Davis. He won 327 games as a head coach.

Frederick spent four seasons on Williams’ staff. He played in 70 games over three seasons in Chapel Hill and was part of Final Four teams in 1997 and ’98 — the first coached by Smith and the other by Guthridge. He has more than 20 years’ experience as an assistant coach.