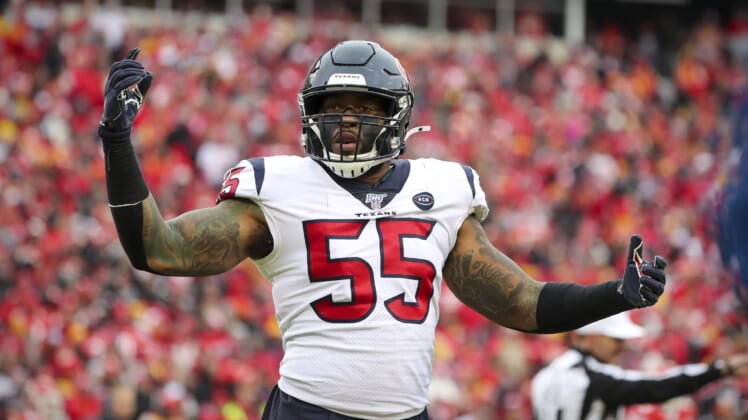 Houston Texans linebacker Benardrick McKinney is being traded to the Miami Dolphins, with the deal coming just a few years after Houston signed him to a five-year, $50 million contract extension.

McKinney, a second-round pick in the 2015 NFL Draft, is coming off a down season in Houston. The 28-year-old linebacker played in just four games, spending most of the year on injured reserve after suffering a shoulder injury. In exchange for McKinney, Miami is sending edge rusher Shaq Lawson to the Texans.

It marks the latest notable trade between these two teams, with the last blockbuster deal coming before the 2019 season. As a result of the Laremy Tunsil deal, Miami owns Houston’s 2020 first- (No. 3 overall) and second-round (No. 36 overall) picks in the 2021 NFL Draft.

For Miami, the deal comes just days after it released linebacker Kyle Van Noy. As with Lawson, the Dolphins spent heavily on both players last offseason. Van Noy signed a four-year, $51 million contract and Lawson agreed to a three-year deal worth $30 million. Now, both players will be playing for new teams just a year later.

Before an injury-riddled 2020 season, McKinney proved to be an effective linebacker for the Texans. He earned second-team All-Pro honors in 2016, recording 79 solo tackles, 11 quarterback hits, five sacks and two pass deflections. In 2018, he made his lone Pro Bowl appearance and excelled against the run and pass.

The 6-foot-4 inside linebacker can still be a quality player, as he proved in 2019. He received a 68.0 coverage grade from Pro Football Focus and continued to hold his own as a three-down player. With the Dolphins, he should have an excellent opportunity to thrive in Brian Flores’ defense and could rebound with a strong season in 2021.

According to NFL Network’s Ian Rapoport, McKinney asked the Texans for permission to find a new team. Within a matter of days, Houston negotiated with the Dolphins and Tennessee Titans before a trade came together on Sunday.

For the Texans, Miami offered something Tennessee couldn’t. Lawson provides a quality edge rusher, demonstrated by his 19 quarterback hurries and five sacks this past season. He’ll be an immediate starter in Houston, helping a front seven that desperately needs help.

Houston will hope this deal works out better than the last deal it made with Miami. Meanwhile, the Dolphins will wait to see if the Texans finally grant Deshaun Watson a trade this offseason. If they do, Miami will be one of the first teams ready to make a blockbuster offer.