Your opinion on the Green Bay Packers’ last few seasons probably depends almost entirely on how you define success. If you’re okay with consistent regular season success, including some truly spectacular wins and moments, coupled with eventual disappointment in the playoffs, then these last few years have been wonderful.

Since winning Super Bowl XLV, the Packers have won the NFC North in five of six years. Aaron Rodgers has ascended into the ranks of all-time great quarterbacks and there have been some memorable wins.

If you define success as nothing less than winning a Super Bowl, these years have been awful. Not only have the Packers failed to complete that goal, they’ve done so with more than enough talent to win.

Colin Kaepernick and Eli Manning beat them at home in the playoffs. They blew a trip to Super Bowl XLIX in astounding fashion against Seattle. Last season, they failed to compete against the Falcons in the NFC Championship Game. These are all abject failures. 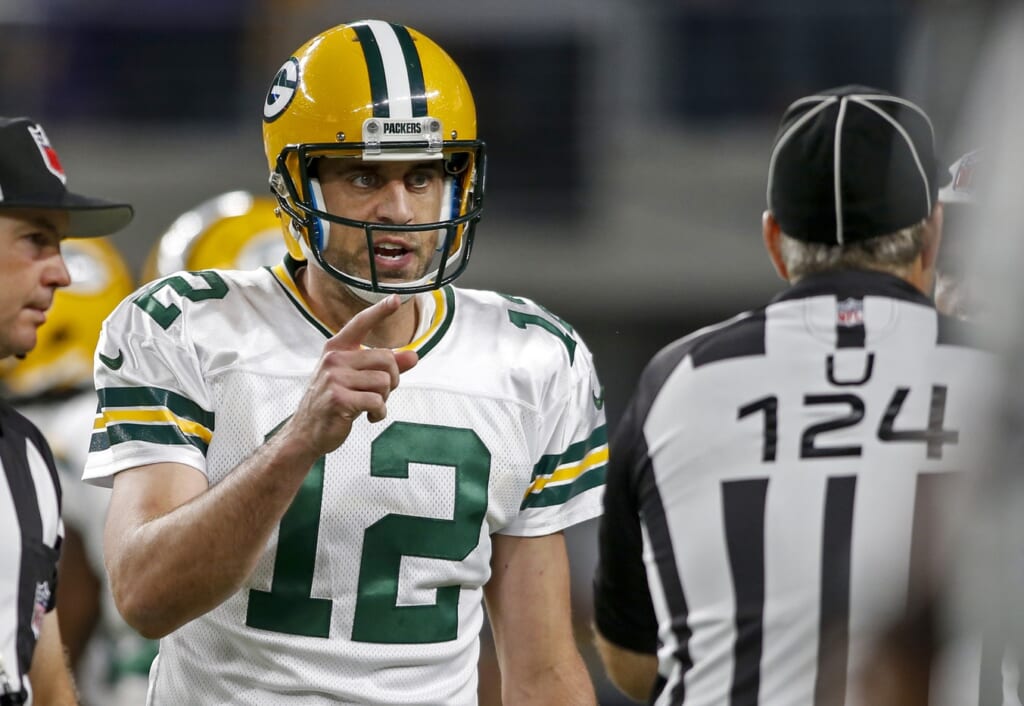 If there’s reason to doubt that statement, it’s only two words: Aaron Rodgers. Green Bay’s quarterback got their offense to seventh in passing DVOA despite a receiving corps that wasn’t especially good. He threw for 4,428 yards and a league-leading 40 touchdowns. Rodgers also ranked ranked top-five in QBR, PFF grading, approximate value, passer rating and interception percentage.

He didn’t get any MVP buzz because it’s what we’ve come to expect from him. Rodgers is simply that good. He’s made do with a head coach in Mike McCarthy whose lack of creativity rivals that of Michael Bay, and a receiving corps that failed him dramatically last season.

Rodgers lost more yards due to his receivers (875) and had more failed receptions (67) than any quarterback in football last season, per Cian Fahey’s charting. Davante Adams is the worst of the Packers’ three primary receivers with ease. Adams made strides last season — he should have won the Most Improved Award over Vic Beasley — but when you make strides from being the worst receiver in football, you’re still below average.

He struggles running routes and catching footballs, which are two important areas for wide receivers to say the least. Per Fahey, he accounted for 16 failed receptions last season — six of them would-be touchdowns.

Randall Cobb wasn’t the reliable No. 2 receiver many considered him to be last season either. Though he missed three games, Cobb’s 610 receiving yards simply weren’t enough. He ranked a pedestrian 39th among receivers in DVOA and 44th in DYAR. Many attributed a down year in 2015 to Jordy Nelson’s injury, but Cobb did worse last season in most categories. It’s time to consider the possibility that his Pro Bowl 2014 season was a fluke instead of the other way around.

Things look better at the top of the depth chart. Jordy Nelson posted 1,257 yards and a league-leading 14 touchdowns while ranking third in DYAR, so there’s not much to complain about there.

Bennett’s production last season in New England was offset slightly by Rob Gronkowski’s presence for eight games, but he still had 55 catches for 701 yards and finished third among tight ends in DVOA.

Bennett gives Rodgers a weapon he hasn’t had before: a tight end who can win the one-on-one, isolation matchups McCarthy’s offense creates.

Surprisingly, the running game was fifth in DVOA last season, but it’s hard to see whether it will stay that way. Ty Montgomery, a converted receiver, looks to be the workhorse. Montgomery was wonderful in the 77 carries he got last season, averaging 5.9 yards per carry, but that’s a lot of faith to put in a player based on a small sample size.

Rookie Jamaal Williams could transition into the starting role if the Montgomery experiment fails. At BYU, Williams was a back who, for the most part, took what the offensive line gave him. If he’s to be effective in the NFL, Williams has to get better at creating for himself after contact and with sharper vision.

Of course, there are worse propositions than simply taking what the Packers’ line gets you. Even after losing guard T.J. Lang, Green Bay’s line looks pretty good. David Bakhtiari and Bryan Bulaga form one of the best tackle combinations in football. Bakhtiari finished top-10 in snaps per blown block last season, per Football Outsiders’ Alanac, and both ranked in the top-15 among tackles in PFF grading. Center Corey Linsley is great if he can stay healthy, ranking 10th at the position with an 80.0 PFF grade last season, albeit over nine games.

If there are issues with this line, they’ll come at guard. Lane Taylor was capable last season, but struggled at times, blowing 10 pass blocks, per FOA, and posting a middling 68.5 PFF grade. Jahri Evans, a former annual All-Pro, replaces Lang, but Evans is 34 years old and cracks have started to show in recent seasons. Despite these questions, it’s unlikely the line as a whole sees issues unless there are more injuries.

Defense (and coaching) will be what ultimately brings Green Bay down. Other than Mike Daniels, there isn’t a defensive lineman the Packers can rely on. Daniels is one of the best run defenders in the league, putting up an absurd 92 percent stop rate last season, per FOA, and should have made at least the Pro Bowl. Despite that, he doesn’t offer much in the way of pass rushing with just four sacks and eight hits last season, per FOA, and neither does anyone else on this line. Kenny Clark, Dean Lowry and Ricky Jean-Francois combined for 3.5 sacks last season.

That wouldn’t be a big deal if there was more than one capable pass rusher at outside linebacker. Nick Perry had 11.0 sacks last season (a number we may see come down as he only had five hits and 21 hurries, per FOA, an abnormal distribution of pressures). But after losing Julius Peppers, the Packers don’t have another player who can consistently get pressure on the quarterback.

That would be a little better if they had star run defenders in place of pass rushers, but that isn’t the case. Clark was solid in 335 snaps during his rookie season, but far from great. Lowry didn’t distinguish himself in the categor. And while Jean-Francois had an 89 percent stop rate last season, per FOA, he’s 31 years old and not an every-down player. 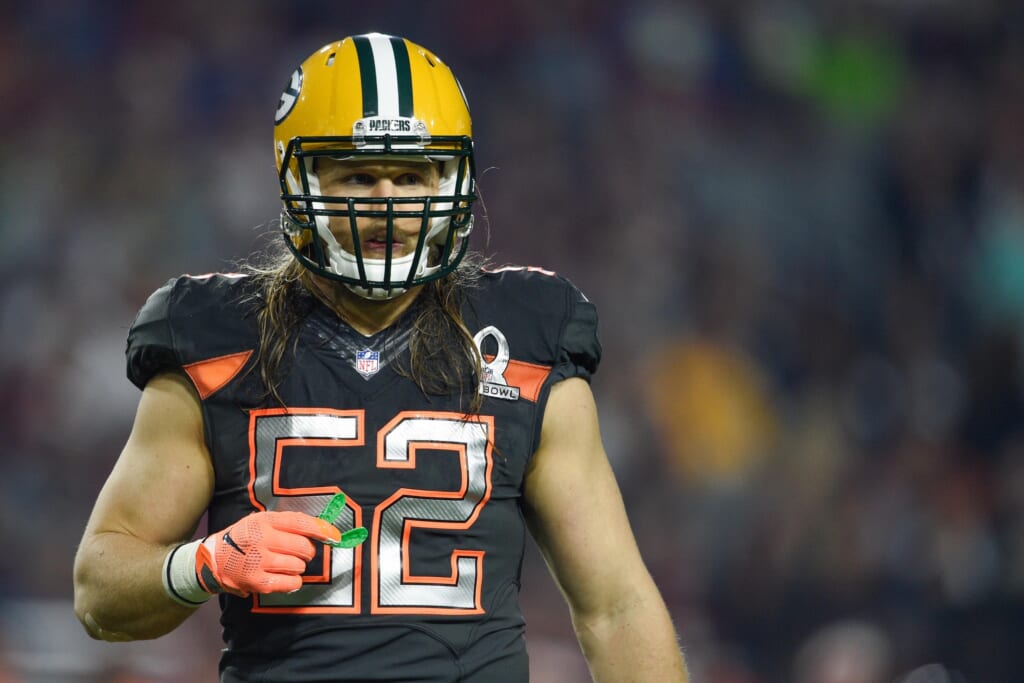 At outside linebacker opposite Perry, Clay Matthews has fallen off a cliff. He had an abysmal 46.1 PFF grade last season along with a poor 69 percent stop rate and a career-worst 11 defeats, per FOA.

On the inside, Jake Ryan is solid, ranking 13th at the position with a 71 percent run stop rate and 23rd with 5.7 adjusted yards per target, according to FOA. Next to him, Blake Martinez struggled through his rookie season but showed good ability. Despite bad run defense numbers, Martinez ranked in the top-20 among linebackers in success rate against the pass and adjusted yards per target, according to FOA.

Cornerback was Green Bay’s biggest problem last season and while they made some changes (and probably won’t see as many injuries), it likely will be an area in which they struggle again. The Packers brought back Davon House, who played well in Titletown during an earlier stint in his career. Of course, if you look at what House has done more recently, this signing looks horrendous. The 28-year old played only 272 snaps in Jacksonville last season and gave up 10.9 adjusted yards per target along with a 26 percent success rate, per FOA. It’s a small sample size (mostly because House played himself out of a job), but 26 percent is impressively bad.

The other change is Kevin King, whom the Packers drafted with the first pick of the second round. King, a University of Washington product, could have easily been a first rounder. A sound technical cornerback, King already has the skills to play zone, which Green Bay favors. If McCarthy wants him in press, however, King’s jamming ability needs work. He’ll be an instant improvement, but it’s never a good thing when a rookie may come into the year as your best corner on paper. That goes double for King, who wasn’t even the best corner on his college team, as Sidney Jones would have been drafted ahead of him if not for an injury that could keep him off the field this year.

Yet, that is the case. At nickel back, Damarious Randall is just bad. His 35.8 PFF grade was 107th among cornerbacks last season, his 9.5 adjusted yards per target was 80th and his 45 percent success rate was 68th, per FOA. This will be an issue, to put it bluntly.

Green Bay’s saving grace in the secondary will be its safeties. Ha Ha Clinton-Dix made his first Pro Bowl last season and the honor was deserved. Clinton-Dix had five picks and nine AV last season. At 25, he’s still getting better as well. Next to him, Morgan Burnett ranked 14th among safeties in PFF grading at 84.8. These two can plug up some of the holes, but at a certain point, they become Lucy and Ethel picking chocolates off the conveyor belt.

Despite their flaws, Green Bay still qualifies as a very good team. Rodgers is good enough to get them there without much help. If you’re a Packers fan and happy with 10 or 11 wins and the division, you’ll feel good about this year. But if you care about winning a Super Bowl more than having fun on Sundays in the fall, this team will be another disappointment.