In the latest installment of the NFL being the No Fun League, Green Bay Packers wide receiver Allen Lazard was fined over $10,000 for a hilarious taunt after a shockingly good block by last week.

In Week 16, the Packers earned their biggest victory of the season when they went into Miami and beat a playoff-contending Dolphins squad 26-20. The Green Bay defense shined in the win, as they forced Miami quarterback Tua Tagovailoa into three interceptions and kept the team’s slim playoff hopes alive.

The Packers’ offense made the most of the turnovers, however, they were pretty quiet on the stat sheets this past Sunday. But there was a standout moment for the offensive unit against the Dolphins. That came with Allen Lazard when he delivered one of the best blocks you may ever see from a wide receiver.

Late in the fourth quarter, the 27-year-old delivered a block on safety Eric Rowe that ended up taking out him, and teammates Elandon Roberts and Christian Wilkins. The play opened up a big hole for running back Aaron Jones and was a key moment late in the win. Well, it seems that Lazard’s celebration after the block made his bank account lighter this week.

After the unbelievable play (which can be viewed above), Allen Lazard had a little fun and counted off the three Miami players that he left laying on the turf. It seems that moment was noticed by the NFL and he has been penalized for it.

On Friday, Pro Football Talk reported that Lazard was hit with a $10,609 fine from the league for his point and count taunt last week. A moment that was not even flagged by officials during the game. 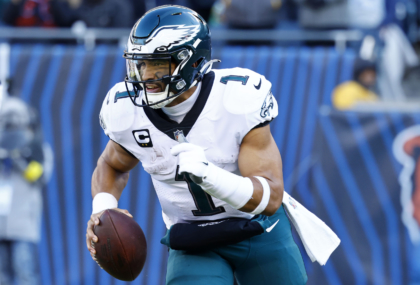 Here’s hoping insanely wealthy Green Bay Packers quarterback Aaron Rodgers is willing to foot the bill for his wide receiver after delivering a block that eventually led to the team’s win last week.