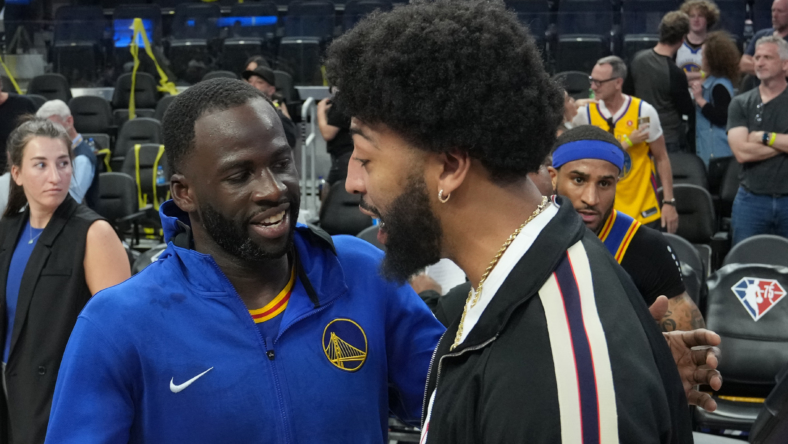 Both the Golden State Warriors and the Los Angeles Lakers are in a terrible shape right now. The Lakers were looking promising as usual during the offseason but started out 3-10 in their first 13 games. On the other hand, the Warriors are just slightly above in the standings with an underwhelming 5-8 overall record and an 0-7 mark on the road.

Perennial All-Star big man Anthony Davis has been arguably the only consistent player on the current Lakers squad. Given Golden State’s lack of talent in the frontcourt, it only makes sense that they pull off a trade for AD.

The Warriors are the most valuable franchise in the league today and they could surely leverage a deal for Davis. However, they would need to go and do a deep dive on their roster in the process.

Let’s take a look at some of the Warriors players who could be included in a trade proposal for Davis.

Golden State won the chip last season without a prime, All-Star-caliber center. While it seemed to have worked out in the past, it is becoming more and more apparent that Stephen Curry needs some impactful help from the frontcourt.

As it stands, the Warriors have a pair of big men in their rotation who haven’t been making any significant contributions on the floor, Kevon Looney and James Wiseman.

Looney has been with the Warriors since 2016 but even to this day, his numbers are yet to impress the organization. For eight straight seasons, Looney never reached double digits in rebounds, and has barely blocked a shot per game.

Wiseman, meanwhile, still hasn’t hit his stride despite coming in healthy this season. It’s not hard to tell that coach Steve Kerr finds it difficult to maximize Wiseman as the 21-year-old has yet to show any notable strength in his arsenal, having averaged only 7.3 points, 4.0 rebounds, and 0.4 blocks per game to date.

Looking at the Looney and Wiseman situation, it appears that all signs point to an offer involving a couple of future picks in exchange for Davis as a starting-off point.

It’s always thrilling to have a superstar back on the lineup. However, the return of Klay Thompson to the Warriors squad hasn’t been a fairytale thus far.

Despite being still in his prime years, Thompson’s numbers are now far from his All-Star years tally of 20 and above points per outing. After 11 games this season, Thompson is only averaging only 14.7 points per game.

With the Lakers lacking a proven three-point sharpshooter, Thompson, with some future picks or young reserves, would be an enticing trade pitch for LA.

Warriors veteran Draymond Green is not known for scoring. His biggest assets are rebounding and playmaking though he never consistently registered double digits in the said categories. Nevertheless, Green earned quite a reputation for his basketball IQ.

However, it seems like Green has been finding it hard to orchestrate some quality plays for the Warriors and it shouldn’t stay that way for the rest of the season. This opens the door for a potential trade.

Green is still a valuable player and the Lakers might find a use for his commendable leadership. Along with future picks or either Thompson and/or Andrew Wiggins, Golden State could come up with an attractive proposal for the Lakers.

Regardless of when and how, the Warriors need to have Davis on their squad, especially if they continue to lose games.