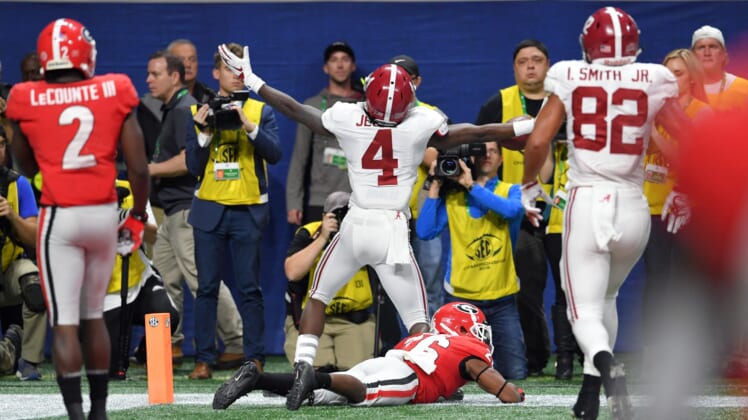 For years, Nick Saban and the Alabama Crimson Tide football program have dominated the college football landscape. Saban has five national titles with Alabama, winning them in 2009, 2011, 2012, 2015 and 2017. That could change this coming Saturday against Georgia.

Alabama has become the golden example of what a college football dynasty should be. However, for the past few years, Saban’s dynasty has started to chip away. The Georgia Bulldogs now have a chance to end one of the greatest dynasties college football has ever seen.

3. This seems to be Georgia’s year

Georgia has started this season red hot. Georgia struggled in its first game of the season against Arkansas, but has not looked back since. The team dominated No. 7 Auburn back on Oct. 3 and seemed to get whatever it wanted with ease.

The following week, Georgia flexed its muscles and showed the country why it is a national title contender. The Bulldogs beat No. 14 Tennessee by 23 points and that wasn’t even the most impressive result of their win. Georgia’s defense held Tennessee to negative one rushing yard. That is an absurd statistic, meaning that this Georgia defense might be one of the best we’ve seen in recent program history.

2. The Crimson Tide are more vulnerable than recent years

Alabama gave up 48 points to Ole Miss last week. The Rebels don’t have an electric offense. This is also out of character for any Nick Saban-led squad. The team gave up over 600 yards against Alabama. While it’s a positive the Crimson Tide were able to drop 63, they are not going to come close to matching that accomplishment against Georgia’s stacked defense.

Alabama is relying heavily on Najee Harris to carry the offense. Harris will be faced with a tall task facing the No. 1 rushing defense in all of college football. If Georgia shuts down Alabama’s run game, it will force Mac Jones to make some big plays.

Jones has been extremely efficient thus farm completing 79.5% of passes for 1,101 yards and eight touchdowns. He also has only thrown one interception. However, he has not faced a defense anything close to Georgia’s and it might be too much for him to handle.

Saban’s defense has shown that it is not ready to play a top tier offense. Georgia should be able to run all over this unit with Alabama’s offense not being able to keep up. If Georgia beats Alabama, this may mark the beginning of the end for Alabama’s dynasty.

1. Alabama has a very tough schedule

In 2019, Alabama lost to LSU and did not make the College Football Playoffs. With the comeback of the Big 10 and the Pac 12, a loss to Georgia may be too much for Alabama to overcome. Alabama still has to play Tennessee, Mississippi State, LSU and Auburn.

Even though LSU is not matching the production we saw in 2019, the tigers can still pull off the upset. Mississippi State pulled off the upset versus LSU and will likely keep its game against Alabama close. Auburn and Tennessee are still very tough teams to play.

Not making the playoffs two years in a row for Alabama is a rare sight. Georgia has the opportunity on national television to put an end to Alabama’s dominance and show the country it is the real national title contender here.