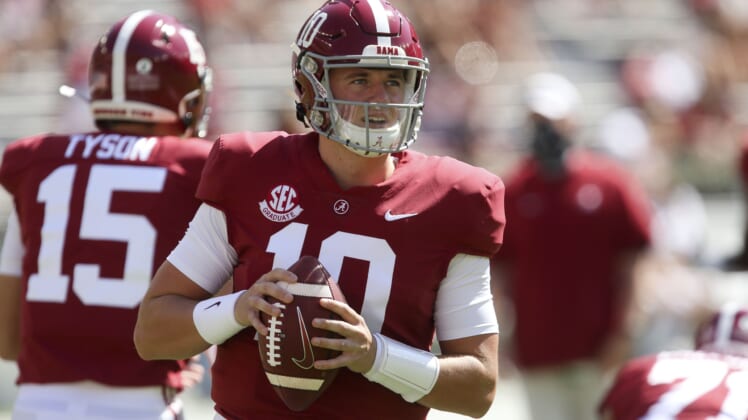 After a delayed start to the 2020 college football season, the No. 2 Alabama Crimson Tide took the field determined to prove they are still kings of the SEC. On Saturday, against the No. 14 Texas A&M Aggies, Nick Saban’s Crimson Tide added to their College Football Playoff resume.

We knew Alabama’s defense was a championship-caliber unit coming into the summer, but there were questions on offense. Could Mac Jones really replace Tua Tagovailoa or would freshman Bryce Young eventually steal the job? In Week 5, the Crimson Tide made an emphatic statement with a stellar performance that sent a message to everyone in the SEC.

On the other side, Texas A&M’s problems might be even bigger than a 28-point loss. Following a humiliating performance in a season-opening win over Vanderbilt, things got even worse for Fisher’s Aggies this week.

Here are the winners and losers from Alabama’s dominant 52-24 victory over Texas A&M on Saturday.

Winner: Mac Jones is more than a game manager

Many wondered if Alabama could still compete with the likes of Clemson this season, given they lost Tagovailoa. Admittedly, we even thought that Jones would just be a game manager and that would put a ceiling on Alabama’s offense. It’s now evident that the redshirt sophomore is an outstanding quarterback.

After throwing for 249 yards in his 2020 debut, Jones eclipsed that mark in the first half against Texas A&M. The 6-foot-3 quarterback hit 273 passing yards at halftime against the Aggies’ defense. Jones kept attacking the second half, making crisp throws and helping his wide receivers make plays. After throwing for a career-high four touchdowns and 435 passing yards, it’s time for everyone to start doubting Jones as QB1 of the Alabama Crimson Tide.

Texas A&M hired Fisher hoping he would take its football program to the next level, potentially even putting up a fight against Alabama. We’re now into his third year at the helm, more than enough time for him to bring in his own recruits and make a mark. One thing is certain, Alabama is still running laps around Fisher.

The Crimson Tide have outscored Texas A&M by 50 points in the first half of their three meetings against Fisher. After a 22-point loss in 2018 (45-23) and 19-point defeat last season (47-28), there are no signs of improvement from the Aggies. We’d be shocked if Fisher’s team kept things close against No. 3 Florida next week and they might not beat Mississippi State either on Oct. 17.

Alabama lost Henry Ruggs III and Jerry Jeudy to the 2020 NFL Draft, losses that would be a seismic blow for any other program. Yet, coming into the 2020 season, everyone talked about the new electrifying duo of Jaylen Waddle and DeVonta Smith, projected first-round picks in our 2021 NFL mock draft. They aren’t the only talented weapons out wide in Alabama’s offense.

Metchie, a four-star recruit in Alabama’s 2019 class, earned the No. 3 receiver spot this summer. He came into Saturday with 65 receiving yards in five career games and surpassed that on one play. The 6-foot speedster torched Texas A&M’s defensive backs for a 78-yard touchdown to open the game and a 63-yard score to close it out. He finished with a team-high 181 receiving yards and two scores, jaw-dropping stats that don’t even include a pass interference he drew. Once Waddle and Smith are in the NFL, Metchie and Bryce Young will do big things.

Loser: Texas A&M’s hopes for relevance in the near future

The Aggies have some big problems. Kellen Mond was hyped as this team’s savior, the quarterback who could carry the team to greatness in the SEC and overcome an underwhelming supporting cast around him. The senior delivered an ugly performance in a 17-12 win over Vanderbilt and while he looked better Saturday, it didn’t matter.

Mond never made the strides people hoped for and it begs the question if freshman Haynes King can develop as a passer with this program. If he can’t, that’s problematic given he’d be playing behind an inexperienced offensive line next season. As for 2020, there’s no reason to believe the Aggies will beat Florida, Mississippi State or Auburn. In fact, a loss to the Tennessee Volunteers is possible. It’s difficult to see this team being a relevant SEC program in the next few years.

Winner: Alabama proves it is still a powerhouse, championship contender

Every year we see a plethora of Alabama’s players jump to the NFL and immediately be the most coveted players in the draft. It was no different this spring when the Crimson Tide had four top-15 picks and nine top-90 selections in the 2020 NFL Draft. Given all of the talent Clemson retained, with Florida on the rise, some thought this might be the season when Alabama took a hit.

Instead, despite dealing with COVID-19 outbreaks this summer, the Crimson Tide are rolling. We highlighted Jones’ performance and Metchie’s emergence, but those are just icing on the cake. A loaded backfield, a fantastic receiving corps and stellar defense are on display this season. Frankly, the Alabama Crimson Tide might not be challenged until the Iron Bowl on Nov. 28.