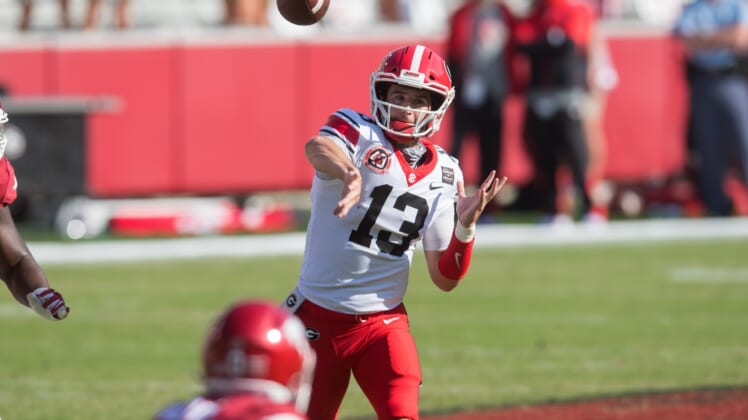 The biggest college football game of Week 5 was saved for Saturday night, with the No. 4 Georgia Bulldogs and No. 7 Auburn Tigers battling it out in an SEC clash. While the matchup might have been close on paper, it was anything but when the Tigers and Bulldogs hit the field.

Georgia turned to Stetson Bennett in the program’s first marquee matchup of the season. He showed some jitters early in his first collegiate start, but the redshirt senior quickly settled in against one of the best defenses in the country. With the help of Todd Monken and some playmakers, the Bulldogs’ offense rolled early.

Auburn came into Saturday’s contest believing Bo Nix would lead the team to a huge victory in this rivalry game. After a sharp outing against Kentucky, the Tigers’ quarterback and the entire offense crashed to earth against Georgia. On a night when their defense also struggled, the combination would be costly for the Tigers.

Here are the winners and losers from the Georgia Bulldogs’ 27-6 victory over the Auburn Tigers.

This is the start of one of the best stories in college football this season. Bennett joined Georgia as a walk-on, hoping he would one day get the opportunity to play for the Bulldogs. When his moment never came, he found an opportunity at Jones County Junior College in Mississippi, before returning to Georgia in 2019. After sitting behind Jake Fromm for a year and then entering the summer as the fifth-string quarterback on the depth chart, Bennett is now living the dream.

Bennett saved the day against Arkansas, coming off the bench and completing 20-of-29 passes with two touchdowns. On Saturday, in his first start, the redshirt junior shined on the biggest stage. He made the big throws when Georgia’s offense needed them, including a dime in the second quarter. There are limitations to his game, which we saw on a few passes, but he held his own as a starter. Given where he was just a few years ago, this start was incredible.

Gus Malzahn and Auburn’s fan base thought they landed their next star when Nix signed with the Tigers. He was thrown into the fire as a freshman, showing flashes of potential with 23 total touchdowns. There was enough for people to think he would make a gigantic leap in his second season. Quite frankly, we don’t see it coming.

You see some of the same eye-popping moments that hint at an All-SEC quarterback, maybe even a Heisman Trophy contender. Unfortunately, there are far more instances when he looks like the stage is too big. He panics against pressure too often and still wildly overthrows wide receivers. Nix is Auburn’s ceiling and that’s a big problem. Instead of making a run at the SEC title, the Tigers seem destined for a good, but not a great year.

It’s not easy to score points against Kevin Steele’s defense and that’s one of the reasons Kirby Smart hired Monken in January. There was confidence he could change things for the Bulldogs, finding ways to open up the offense and bring an explosive element to this attack. On Saturday, we saw every reason why he was brought to this program on display.

This offense was actually fun to watch with Monken calling the plays. Georgia took shots down the field, used pre-snap motions to exploit Auburn’s defense and he played a major role in Bennett looking good. This is a completely different offense, even with a game manager at quarterback. As thiis group gets more settled and Monken’s playbook expands, we expect even bigger things from the Bulldogs.

Not only does he have one of the best names in football, Monday is also a leader in Auburn’s secondary. Steele relies on his junior safety to keep Auburn’s defensive backs in the right position and he helps prevent big plays. Unfortunately for the Tigers, Monday was ejected minutes into Saturday’s game for this targeting hit.

There’s no arguing with the call. It’s the textbook example of the hits the NCAA wants out of football. This is the second time Monday has been ejected for targeting, with the first coming in 2019. While he might have wanted to set the tone early by firing up his teammates, it hurt the Tigers. Once he left the game, Georgia attacked Auburn’s secondary with big plays all over the field.

The Bulldogs have developed plenty of great receivers during the program’s history, sending the likes of A.J. Green, Mecole Hardman and Hines Ward to the NFL. Many hoped Dominick Blaylock would be the next No. 1 weapon, but a second torn ACL ended his sophomore season before it even began. On a night when George Pickens was contained, a new star emerged.

After a productive 2020 debut (six receptions for 62 receiving yards), Jackson got everyone’s attention on ESPN. With millions of football fans watching, the Georgia native erupted at home for 147 receiving yards on nine grabs. Auburn never had an answer for the sophomore, getting left in the dust by his track-like speed. Monken knows how to get playmakers the football in open space, which means Jackson is in the perfect situation for a breakout season.