Former Washington Commanders team president Bruce Allen will be testifying in front of the House Oversight Committee on Tuesday morning regarding their investigation into the organization’s toxic workplace over the last decade-plus.

On Tuesday morning the Washington Post first reported that Allen, a member of the team’s front office from 2009 to 2019, will be giving testimony today at 11:30 AM ET to the congressional committee that is examining allegations of widespread sexual harassment throughout the organization during his tenure overseeing the on-the-field product for the team.

Allen first joined the organization in 2009 when he was hired to be the then-Redskins general manager. During his decade with the franchise, he eventually rose up to team president before being fired from that post in 2019. During his stint as part of the front office in various high-level roles, the organization had a record of 64-109. Making his dismissal three years ago quite understandable.

“The Committee is continuing to investigate the decades-long workplace misconduct at the Washington Commanders and the NFL’s failure to address it,” a spokesperson explained told the Washington post on Tuesday. “Mr. Allen served in senior roles under team owner Dan Snyder for many years, so his testimony is important for the Committee to fully understand these serious issues and advance reforms to protect workers in the future.”

For much of the spring, the Commanders’ off-field woes were one of the biggest stories in the sport as the Committee not only delved deep into the various claims of harassment from former female employees, but they also discovered “financial improprieties” by the team. Those revelations have since led to separate investigations from district attorneys in Washington, D.C., and Virginia, as well as the FTC.

Things have been quiet recently however after owner Daniel Snyder ended his month-long avoidance of a federal subpoena and spoke with the Committee via a zoom video conference call last month. Following the Allen news, Pro Football Talk speculated that Snyder very well could have foisted much of the blame for the abhorrent work environment from the team on Allen. This would make a great deal of sense since he was not subpoenaed by the Committee until after Snyder gave his testimony earlier this summer. 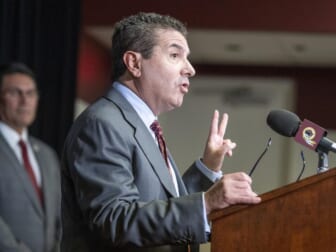 With mid-term elections coming this November and many seats in congress up for grabs, the Committee’s investigation could be coming to a conclusion very soon.