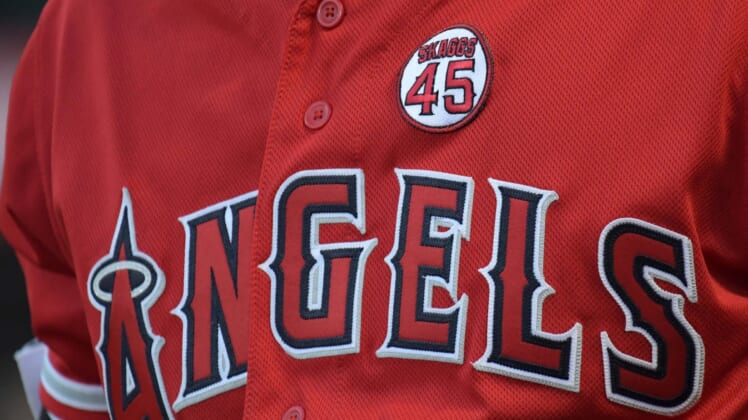 Jul 17, 2019; Anaheim, CA, USA; Detailed view of a memorial patch for Los Angeles Angels pitcher Tyler Skaggs (45) on the jersey of designated hitter Shohei Ohtani (17) at Angel Stadium of Anaheim. Skaggs, 27, died at a hotel in Southlake, Texas, July 1, 2019, where he was found unresponsive prior to a game against the Texas Rangers. Mandatory Credit: Kirby Lee-USA TODAY Sports

Former Los Angeles Angels employee Eric Kay was indicted on two counts for his role in the death of starting pitcher Tyler Skaggs, who passed away from an overdose in July 2019.

Skaggs died on July 1, 2019, at the age of 27 after overdosing on fentanyl, oxycodone, and alcohol at the team’s hotel during a three-game series against the Texas Rangers. In the investigation following his death, it was reported the Angels knew of his drug use and Kay provided Skaggs with the drugs.

Kay served as the team’s director of communications before being charged with conspiracy to distribute fentanyl in late July. He later admitted to the DEA that he supplied Skaggs with the drugs and he informed multiple officials with the clubs that the pitcher was suffering from drug abuse.

On Friday, Kay was indicted on the count of conspiracy to distribute and received an additional charge for distributing the fentanyl that resulted in Skaggs’ death. Additionally, according to The Los Angeles Times, Kay and others conspired to distribute fentanyl “beginning in or before 2017.”

According to the affidavit from the criminal case, Kay visited Skaggs on the night of June 30 to deliver to Skaggs following his request for pills. Texts documented the exchange between the two, which played a role in the charges. Based on the autopsy, the DEA determined that Skaggs would not have died if fentanyl wasn’t in his system.

A month after Skaggs’ death, MLB and the MLB Players Association held talks about opioid testing. Under the new policy, the league now tests for opioids. Any positive test for opioids results in the player receiving an evaluation and treatment for their first offense, rather than a suspension.

The Angels originally denied reports that one of their employees provided Skaggs with opioids. Following Kay’s revelation, the team has rejected claims that it knew of Skaggs’ addiction.

On the anniversary of his death, the MLB world honored their fallen friend and peer.