For the Browns, This Year’s Draft is the Most Important in Recent History

Analyzing the status of the Cleveland Browns in today’s NFL can be a mind-boggling experience. Seemingly flush with talent on both sides of the ball, this team simply can’t get over the hump.

Over the past few years, Cleveland’s front office has done a tremendous job acquiring additional picks in order to rebuild a team that has seen itself mixed in mediocrity over the years. From the Tom Heckert/Mike Holmgren pairing earlier this decade to Michael Lombardi’s one-year stint in 2013, the number of high-round picks Cleveland has made is eye-opening. Then, this past May, new general manager Ray Farmer found a way to nab the Buffalo Bills’ first-round pick in the 2015 NFL draft by moving down just four spots in the top 10.

As noted, the volume of high-round picks haven’t been an issue in Cleveland.

It has selected 10 times in the first two rounds over the past four years. During that time, the Browns have made a whopping six first-round picks—a number that it’s conceivable to build a team around.

Sadly for fans in Cleveland, the issue here has been the downright failure of the team to do anything with a never-ending amount of high-value picks.

Looking back a the past four drafts, only six players the Browns have selected in the first or second round are still with the team. Of those six players, 2014 first-round picks Johnny Manziel and Justin Gilbert are coming off horrendous rookie seasons that saw themselves firmly locked in the team’s doghouse.

Pro Football Reference utilizes an advanced statistic called AV (approximate value). The idea behind this stat is somewhat similar to WAR in baseball and PER in the NBA. It gauges a player’s value to a team over the course of an entire season and his career.

In order to understand just how much the Browns have struggled in the draft in recent seasons, let’s check out the combined AV of the 10 players they have selected in the first and second round during that span. 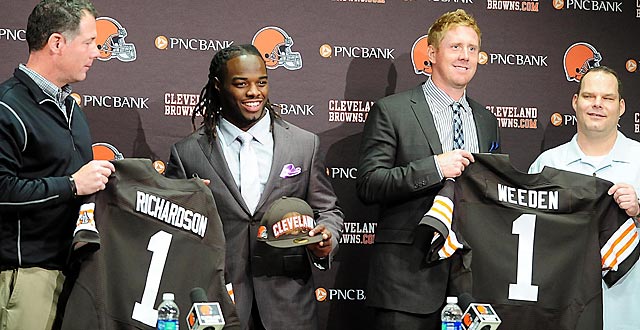 The Browns can’t afford to have a repeat of the 2012 first round.

That’s a combined 112 approximate value from these 10 picks. Of the Browns six first-round picks during this span, they have a combined value of 60.

For comparison’s sake, the Seattle Seahawks have made six first or second-round selections since 2011 with only two coming in the initial round. Of these six players, the combined value sits at 124. Considering some of Seattle’s core has been built in the mid rounds, that’s an astonishing number.

In order to magnify the descrepency between Cleveland and teams that have actually hit in the draft, let’s look at division-rival Cincinnati Bengals, who were also coming off a double-digit loss season heading into the 2011 draft.

Marvin Lewis and company have made 10 selections in the top two rounds over the past four years with only half of them coming in the initial round. Of the 10 players Cincinnati selected, every single one still remains on the team. They also have a combined value of 151 thus far in their careers.

It’s not a coincidence that Cincinnati has gone 40-23-1 and has earned four straight playoff appearances since its 2011 draft haul. During that same span, the Browns are 20-44. 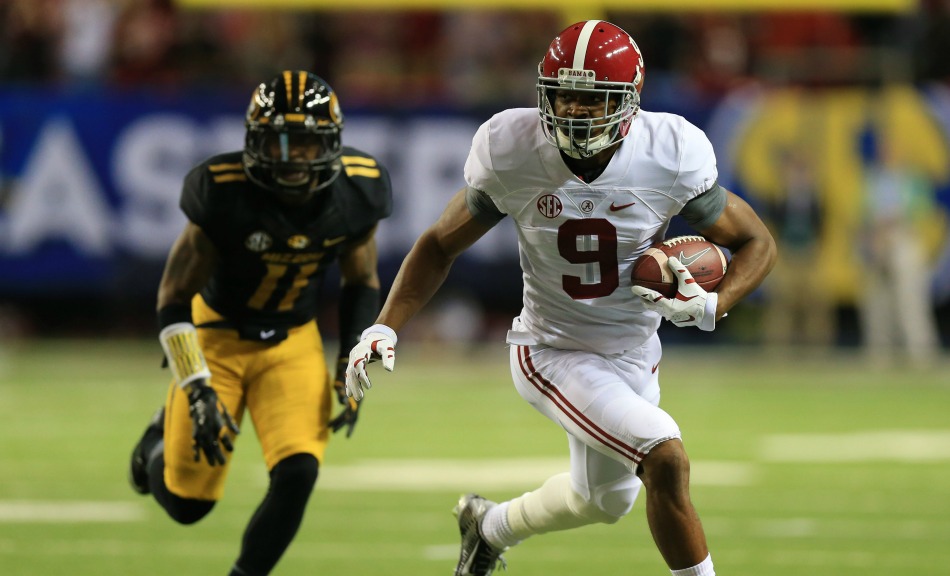 Courtesy of USA Today Images: Amari Cooper could be a potential trade-up option.

Cleveland possesses six of the first 115 picks in the upcoming draft, including two in the top 20. As to where the quantity of picks for the Browns haven’t been an issue in the past, they now need to turn the page and actually start hitting on these selections.

While talented, there are still a large amount of holes on this team. What is it going to do at quarterback, especially with Manziel’s future up in the air? Josh Gordon is suspended for yet another season, so wide receiver will have to be a target area. Defensively, the team needs to improve in the front seven, mainly from a pass-rush standpoint.

Outside of quarterback, which is nothing less than a black cloud hanging over the organization, the Browns are in a good spot to ace the upcoming draft.

Selecting 12th and 19th overall in the first round, Cleveland could target two positions of need while still acquiring the value that’s necessary to succeed in the draft. It’s possible that one of the draft’s top three receivers—Amari Cooper, Kevin White or DeVante Parker—will be available at 12. However, the Browns have the ammo to move up in order to guarantee themselves one of these ultra-talented pass catchers.

With the other first-round pick, there should be a high-end EDGE player available in a draft that’s seemingly flush with elite-level pass-rush talent.

With a solid base of talent along the offensive line in the form of Joe Thomas, Alex Mack and Joel Bitonio, the Browns are in the process of building a bully up front. Combine that with a talented defensive line, and the first area of need in order to contend is already in place—the trenches.

Now factor into the equation a two-headed running back monster in the form of Isaiah Crowell and Terrance West, who combined for over 1,400 yards and 13 touchdowns last year, and there should be reason for optimism in Cleveland.

This doesn’t even take into account the presence of three Pro-Bowl caliber players in the secondary in the form of Joe Haden, Donte Whitner and Tashaun Gipson.

The pieces are most definitely in place for Cleveland to move on from its annual status as a cellar-dweller. They simply can’t afford a repeat of any of the past four drafts. The opportunities are endless in this draft, general manager Ray Farmer and company just need to make sure they take full advantage.