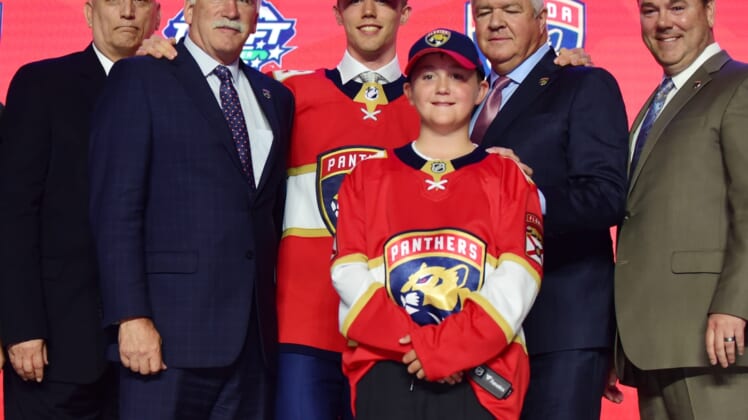 Jun 21, 2019; Vancouver, BC, Canada; Spencer Knight poses for a photo after being selected as the number thirteen overall pick to the Florida Panthers in the first round of the 2019 NHL Draft at Rogers Arena. Mandatory Credit: Anne-Marie Sorvin-USA TODAY Sports

The Panthers drafted Knight in the first round (13th overall) in 2019.

The 19-year-old netminder went 16-4-1 with a .932 save percentage, 2.18 goals-against average and three shutouts in 21 games as a sophomore with the Eagles in 2020-21. The 6-foot-3 Connecticut native ranked fifth in the nation in save percentage and tied for fifth in wins.

“We are thrilled to have agreed to terms on a contract with Spencer,” Panthers general manager Bill Zito said in a news release. “He is an immensely talented and dynamic young goaltender who has been an elite player at every level that he has played. From the collegiate ranks to international tournaments, Spencer has consistently elevated his game, a testament to his work ethic, compete and character. We are excited for him to take the next step in his career with the Panthers and look forward to his future with our club.”

Internationally, Knight backstopped the United States to a gold medal at the 2021 IIHF World Junior Championship in Edmonton. He finished 5-1-0 with a 1.63 GAA, .940 save percentage and three shutouts. He stopped all 34 shots he faced in a 2-0 win against Canada in the Jan. 5 final.