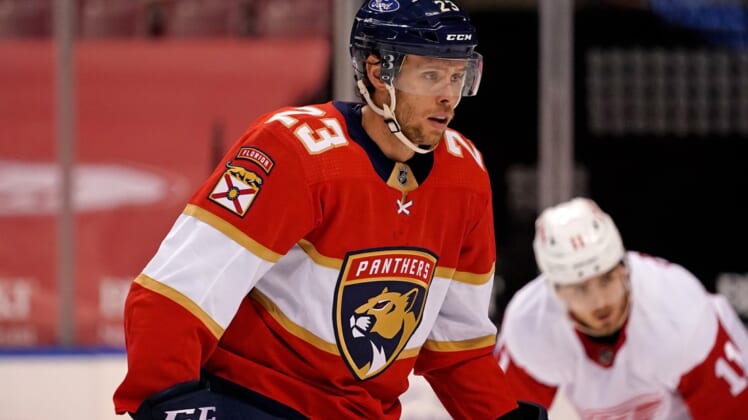 The Florida Panthers will try and extend their three-game winning streak when they play the Detroit Red Wings in Sunrise, Fla., on Thursday night.

This will be the finale of the eight-game season series between the teams.

Florida has won five of the first seven games, including 4-1 on Tuesday night. The Panthers are 12-2-1 in their past 15 games against Detroit.

The Panthers have been winning despite injuries to some of their top players, and Tuesday’s victory pulled them into a first-place tie with the Tampa Bay Lightning in the Central Division.

Florida also became the third team in the NHL to hit the 50-point mark this season.

The Panthers lost defenseman Aaron Ekblad for an expected 12 weeks when he had surgery on his left leg on Monday. The Panthers also have been playing without captain Aleksander Barkov and Patric Hornqvist.

Tuesday, top-line right wing Anthony Duclair suffered an upper-body injury as he was tripped up by Detroit goalie Thomas Greiss and slammed hard into the end boards.

Florida coach Joel Quenneville said Duclair would be out at least a week.

Quenneville said Barkov could return during this homestand. After Detroit on Thursday, the Panthers host Columbus over the weekend.

“We’re on a three-game winning streak now after a three-game losing streak, so it shows the resiliency of our team,” said Carter Verhaeghe, who scored twice for the Panthers on Tuesday.

“Other guys have been stepping up. … Everyone’s playing more roles; guys who haven’t been playing are playing now and getting opportunity. It kind of adds a little more excitement to the lines. I think guys have done a great job rolling with it.”

Detroit came to South Florida riding the momentum of a rare two-game sweep as the Red Wings took both games from the Columbus Blue Jackets this past weekend.

But Florida’s Jonathan Huberdeau scored 17 seconds into the game Tuesday, and the Panthers took a 3-0 lead by the first intermission.

It wasn’t the way Detroit wanted to play in this one.

“I felt our energy level, especially early in this game, was not there,” Detroit captain Dylan Larkin said. “They came out hard.”

Said coach Jeff Blashill: “We weren’t at our best. We had a bunch of guys that played their B and C games. We need everybody on their A game every night.”

Detroit likely will start Greiss on Thursday as he ended up making 24 saves in relief of Calvin Pickard, who was pulled after Brett Connolly scored to make it a 3-0 game.

The Panthers are expected to go with Sergei Bobrovsky, who was strong throughout Tuesday and ended with 35 saves — 17 in the second period.

Bobrovsky has won his past two starts and is 8-3-0 this month.

“We’re missing a few key guys, but I think it has opened the opportunity for other guys to play a bigger role, bigger minutes and earn their spot in the lineup,” Bobrovsky said. “There is some adversity for us to overcome, to get together and be strong. … We had some good composure and played our game. It’s a great win.

“It’s great to be there, it’s great to help my teammates, and if they need me, I’m always there for them.”