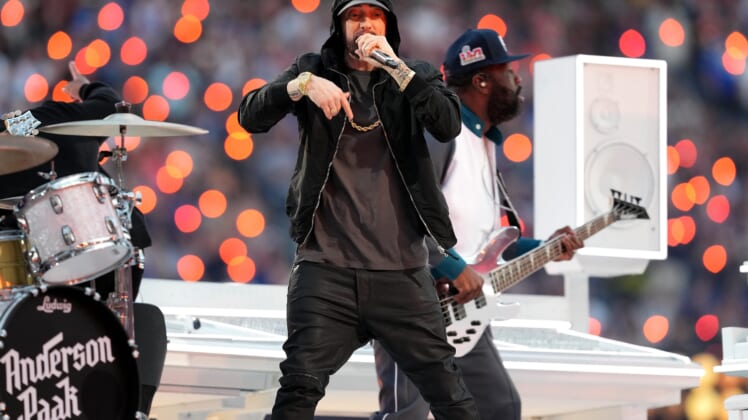 The Super Bowl LVI halftime show is already viewed as one of the best Super Bowl performances ever, with Eminem joining Dr. Dre, Snoop Dogg, Mary J. Blige, Kendrick Lamar, and 50 Cent in a mix of incredible hip-hop performances at SoFi Stadium.

While the series of performances captured everyone’s attention, many also spotted Marshall Mathers rocking a new pair of Air Shady sneakers. After delivering two of his greatest hit songs, “Lose Yourself” and “Forget About Dre”, the iconic rapper revealed his new kicks on Instagram.

Debuted on Sunday night, the Nike Air Jordan 3 PEs are directly from Jordan Brand, with a custom design made perfect for Eminem. The Detroit native’s sneakers featured a black, white and red colorway with a translucent outsole. On the heel, Nike created a special ‘Hi, My Name is Slim Shady” name-tag.

It’s currently not known if Eminem and Nike are planning an upcoming release. However, the legendary performer has a history of debuting custom-made sneakers and then using them for a good cause. A pair of Carhartt X Eminem Air Jordan, one of just 10 pairs ever made per the Detroit Free Press, was sold at auction in 2018 and the money went towards the Charities Aid Foundation of America.

Related: The Most Expensive Vintage Nike Shoes – From $29k To $560k

Considering the huge stage the Air Jordan 3 PE was on and the historic significance of the Super Bowl LVI halftime show, the Jordans will likely result in a massive bidding war if they are put up for charity auction. Given his history, that’s likely where these sneakers are headed.