Eight facts about the 2016 Pro Football Hall of Fame class

On Saturday, the Pro Football Hall of Fame will have eight new members as it inducts the Class of 2016.

As players, coaches, executives, or some combination of the three, all members set to be inducted were obviously great figures in the pro football world.

But what are some things that we may not know about the Hall of Fame’s eight-newest members?

1. Marvin Harrison and Donovan McNabb were teammates for one year at Syracuse

As a freshman, McNabb was Syracuse’s starting quarterback. He completed 128 of 207 passes for 1,991 yards and 16 touchdowns. His future Hall of Fame teammate helped McNabb’s stats a great deal. Harrison caught 56 passes for 1,131 yards and eight touchdowns.

Of course, McNabb helped Harrison as well. All of the above totals were career bests for Harrison during his college days.

Harrison was selected No. 19 overall by the Colts in 1996. That worked out well.

Three years later, McNabb was taken No. 2 overall by the Philadelphia Eagles. That worked out pretty well too.

2. Brett Favre was traded for a college teammate

The Atlanta Falcons will not look back at their decision to trade Brett Favre as a good one. Atlanta used a second-round pick to draft Favre in 1991.

It obviously didn’t work out that way.

One of the greatest to ever do it. #GunSlinger @Favre4Official https://t.co/0t4Pv6Wnli

The pick was used on running back Tony Smith, who was Favre’s teammate at Southern Mississippi. Smith rushed for 329 yards as a rookie and was used exclusively as a return man after that.

Following the 1994 season, Smith left the Falcons to sign with the Carolina Panthers, where he never played in a regular season game.

The 1992 NFL Draft was not an especially strong one in NFL history. No player selected that year is in the Hall of Fame. Still, Dale Carter, Robert Jones, Robert Porcher and Darryl Williams were all taken after Smith in the first round.

All made at least one Pro Bowl. Smith never did. In a related story, the Falcons are still looking for their first Super Bowl victory. One has to wonder if that would be the case if Atlanta held on to No. 4.

In 1997, the then St. Louis Rams used the first pick of the draft on Orlando Pace. Pace was the first offensive lineman selected with the top pick in nearly three decades.

Ron Yary of the Minnesota Vikings was the last offensive lineman taking with the top pick all the way back in 1968.

Yary and Pace certainly set a high standard for all future linemen taken first overall. Yary had a brilliant career and was enshrined in Canton in 2001. Pace also had a marvelous career and will be enshrined this weekend.

While Pace was the first player selected in 1997, he’s not the first member of that class to be selected to the Hall of Fame. In fact, Pace is not even the first of 1997’s offensive tackles to earn a spot in Canton.

With the No. 6 pick that year, the Seattle Seahawks selected fellow future Hall of Famer Walter Jones, who was inducted back in 2014. 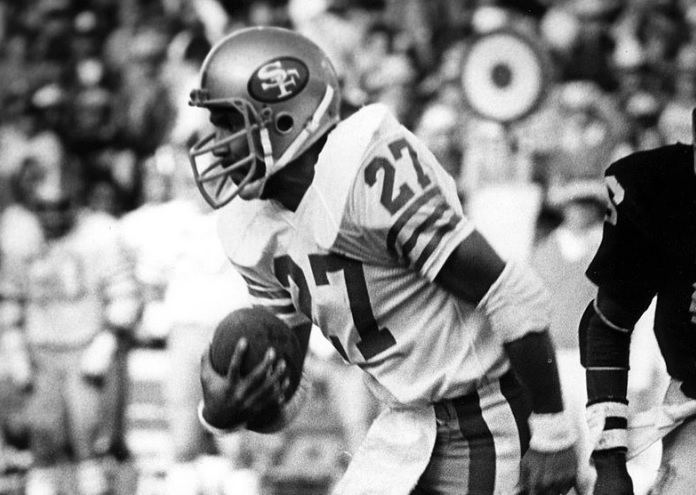 Dungy won a Super Bowl with the Pittsburgh Steelers in 1978. The team of the 1970’s traded Dungy to the San Francisco 49ers following the year.

In his one year in San Francisco, Dungy was on a team that laid the groundwork for what would be the team of the 1980’s.

The 1979 season was the first in San Francisco for head coach Bill Walsh. While he played sparingly, it was also the rookie season of future Hall of Fame quarterback Joe Montana.

Dungy had another future Hall of Fame teammate in 1979. That season was also the last hurrah in the NFL for O.J. Simpson, who found ways to stay in the news well after his playing days were done.

5. Ken Stabler enjoyed life and had a collection to prove it

Two members of this year’s Hall of Fame class — Ken Stabler and Dick Stanfel — will be inducted posthumously. This seems to be a tradition across sports. Deserving players and coaches are repeatedly snubbed during their lives, only to be voted in shortly after their deaths.

We shouldn’t feel too bad for Stabler, though. While he never got to enjoy being voted in the Hall of Fame, he had plenty of fun in his life. In fact, Ken Stabler was The Most Interesting Man in the World well before there was such a thing.

The Oakland Raiders of the 1970’s did not have training camp at a beautiful, state-of-the-art facility, as is common today. They did not train at a college campus, which was normal at the time.

The Raiders stayed at the El Rancho Tropicana Hotel, a run down motel in Santa Rosa. Stabler had plenty of company in his room and kept reminders of said company all over the place.

“The collecting of female undergarments became an annual rite of training camp for many of the Raiders . . . I liked to tack my collection up on the walls,” Stabler said in an excerpt of a Dennis Richmond book published on Deadspin in 2010.

Stabler was also prolific on the field. By modern standards, his numbers look modest. Stabler threw for just under 28,000 yards with 194 touchdowns against 222 interceptions. But as a starter, his teams were 96-49-1.

In eulogizing Stabler, Bob Padecky of the Santa Rosa Press Democrat compared him to arguably the greatest quarterback of all-time, Joe Montana.

“It’s a tossup for me who leads the offense 80 yards downfield with two minutes left, Joe (Montana) or Kenny.”

Indeed. Stabler was a legend in all aspects of life.

Though, this was a completely different story in the 1950’s.

Playing for the Dons in 1950, Stanfel was a teammate of Ollie Matson, Gino Marchetti and Bob St. Clair.

Matson and Marchetti were both inducted into the Pro Football Hall of Fame in 1972. St. Clair received the same honor in 1990. After Saturday’s induction, Stanfel will be the fourth member of San Francisco’s 1950 team to be enshrined in Canton.

Four future NFL players being on one college team is noteworthy. Four future Hall of Famers, on the other hand, is legendary.

7. Kevin Greene is the fifth man from the 1985 NFL Draft to be inducted into Canton

The 1985 NFL Draft produced some notable players. While Herschel Walker, Doug Flutie, Jay Novacek, Randall Cunningham and Mark Bavaro are not in the Hall of Fame, all made a big impact in the NFL.

With the inclusion of Greene, five players from that draft are now Hall of Famers.

Also noteworthy is the connection that all of those players had. Smith and Reed, of course, were longtime teammates with the Buffalo Bills. In 1997, Rice, Doleman and Greene were all teammates in San Francisco with the 49ers.

While owning the 49ers, Eddie DeBartolo Jr. came across plenty of future Hall of Famers. Well after he stepped down from that position, DeBartolo joined forces with another Hall of Famer, who never played for the 49ers.

In 2005, the DeBartolo family and Derrick Brooks put the idea together for the Brooks DeBartolo Collegiate High School in Tampa. In 2007, the school opened its doors with the following mission statement.

“Brooks DeBartolo Collegiate High School strives to be a model collegiate school offering a broad and rigorous educational program to students from diverse cultures. Within a caring, respectful environment, the school is committed to instilling in each student a desire to learn, to take appropriate risks, to accept challenges and to become a lifelong learner.”Di

While the on-field exploits of DeBartolo and Brooks will certainly grab headlines, it’s hard to get more impactful than this school.