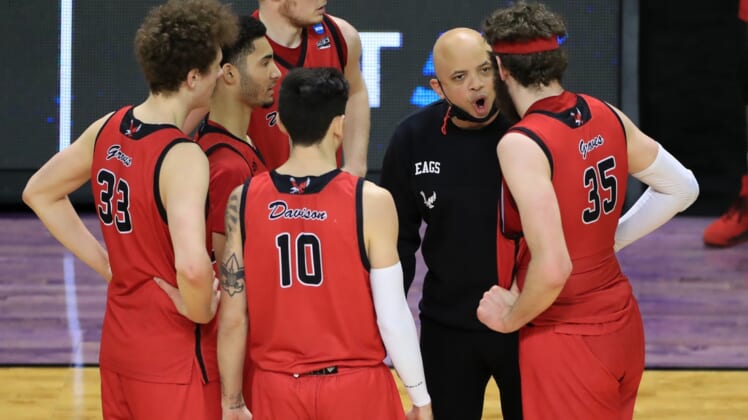 Eastern Washington Eagles head coach Shantay Legans huddles with his players during a time out against the Kansas Jayhawks during the first round of the 2021 NCAA Tournament on Saturday, March 20, 2021, at Indiana Farmers Coliseum in Indianapolis, Ind. Mandatory Credit: Matt Stone/IndyStar via USA TODAY Sports

Riley, 32, spent the past seven seasons as an assistant coach and 10 seasons total working for the basketball program.

Legans left to become head coach at Portland after guiding the Eagles to the NCAA Tournament this season. No. 14 seed Eastern Washington led by 10 points against No. 3 seed Kansas in the second half of the first-round matchup before falling 93-84.

“The past 10 years at EWU have been an incredible journey and I am grateful to all the current and former players who helped put me in this position,” Riley said in a statement.

David Riley will be trying to keep a winning tradition going as Eastern Washington has won 20 or more games in four of the past seven seasons. The Eagles went 16-8 this season with a lighter schedule.

“David has been an integral part of Eagle Basketball for years and so he understands the culture and the potential that this program has,” athletic director Lynn Hickey said in a news release. “He is a very bright young coach who has a tremendous work ethic and a heart for Eastern Washington University.

“We have just completed an outstanding season and we are confident that Coach Riley is the leader who can continue that momentum and success with our program.”

Among the expected returners for the Eagles is 6-foot-9 Tanner Groves, who averaged a team-best 17.2 points per game. Groves scored a career-best 35 in the loss to Kansas.