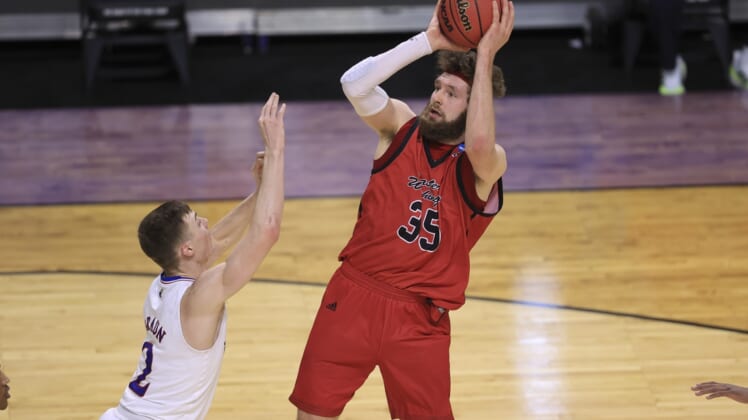 David McCormack scored 20 of his 22 points in the second half as third-seeded Kansas rallied to a 93-84 victory over Eastern Washington on Saturday in the first round of a West Region game in the NCAA Tournament at Indianapolis.

The Jayhawks (21-8) trailed by 10 early in the second half while failing to contain the Eagles’ Tanner Groves, who sizzled for a career-high 35 points to trigger an upset bid by the Big Sky qualifiers.

Kansas, however, eventually came up with key stops and hot shooting down the stretch to record its 14th consecutive first-round win.

McCormack missed the one game Kansas played in the Big 12 tournament because of COVID-19 protocols. He logged 25 minutes as a reserve and added nine rebounds on Saturday.

Ochai Agbaji had 21 points and Marcus Garrett added 20 points and eight rebounds for the Jayhawks. Dajuan Harris had a career-high 13 points off the bench and Christian Braun tallied 12.

A Kansas starter, Jalen Wilson, sat out Saturday after a positive coronavirus test kept him from traveling for for team’s NCAA Tournament opener.

Jacob Groves, Tanner’s brother, added 23 points for Eastern Washington (16-8), which led for 20-plus minutes. The Jayhawks took the lead for good on a Harris 3-pointer with 9:45 left.

The Groves brothers scored 16 points apiece to propel Eastern Washington to a 46-38 halftime lead. Each canned three 3-pointers while combining to go 11-for-15.

The Eagles closed with a 27-12 flurry, canning five treys inside the final five minutes while shooting 53.3 percent for the half.

Eastern Washington raced to a 9-0 edge and prompted a timeout two minutes into the game by Kansas coach Bill Self. At that point, Self inserted McCormack into the game and the Jayhawks bounced back to lead 26-19 on a 3-pointer by Braun.

Garrett scored 12 first-half points to lead the Jayhawks, who missed six straight shots without an offensive board during one stretch. That enabled the Eagles to rally for their halftime margin.