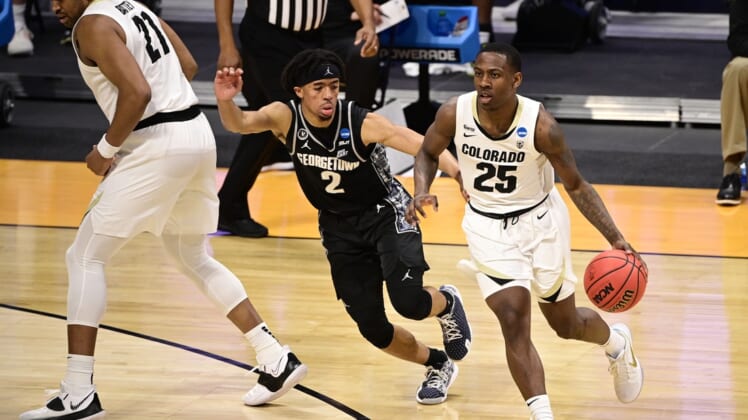 Jabari Walker hit all five of his 3-point attempts on his way to a career-high 24 points, and the fifth-seeded Colorado Buffaloes beat the No. 12 Georgetown Hoyas 96-73 in the first round in Indianapolis on Saturday.

D’Shawn Schwartz scored 18 points, McKinley Wright IV had 12 points and 13 assists and Eli Parquet finished with 10 for the Buffaloes (23-8), who hit 16 3-pointers.

Both teams were making their first NCAA Tournament appearances in years. Georgetown’s last bid came in 2015 while Colorado had not been there since 2016.

The Buffaloes earned their first NCAA Tournament win since beating UNLV in the first round in 2012. They had lost their last three first-round games.

After an even start, the Buffaloes showed they were ready for the moment. Walker heated up with a dunk and a 3-pointer, and Wright hit one from deep to start a 10-0 run for a 17-10 lead.

Walker then sank three straight 3-pointers, Wright added two free throws and Keeshawn Barthelemy hit another one from behind the arc during a 14-5 run that put Colorado ahead 31-17.

The Buffaloes made 11 of 17 shots from 3-point range in the first half while the Hoyas were just 1-for-9 from behind the arc. Colorado had just five 2-point field goals in the first 20 minutes.

Georgetown made the first basket of the second half, but Dallas Walton scored seven quick points for the Buffaloes and Wright had a three-point play to extend the lead to 30.

Following a Schwartz 3-pointer, Colorado’s 14th of the day, the Hoyas cut the lead to 68-50 on a layup by Bile and a pair of free throws from Carey. Colorado responded with a 16-2 run to go ahead 84-52 with six minutes left.