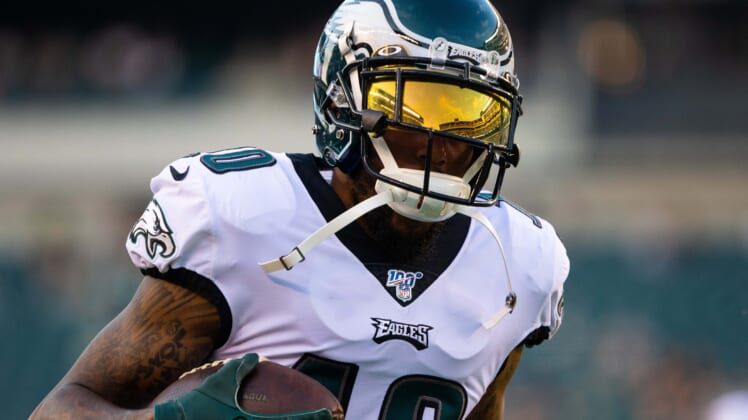 DeSean Jackson’s reunion with the Philadephia Eagles has not gone according to plan. After playing just two games with the team this season, Philadelphia has placed Jackson on injured reserve.

For all intents and purposes, this ends Jackson’s season. He suffered a torn abdominal muscle in last week’s win over the Chicago Bears. It was Jackson’s first action since suffering another injury back in Week 1.

Things started out so swimmingly for Jackson in his return to Philadelphia. He caught eight passes for 154 yards and two touchdowns in a season-opening win over his former Redskins team.

This is also a big blow for Philadelphia. Fellow receiver Nelson Agholor has not lived up to expectations and was on the trade block prior to last month’s deadline.

Meanwhile, Alshon Jeffery suffered an ankle injury last week and his status for Philadelphia’s next game against the New England Patriots on Nov. 17 is up in the air.

Philadelphia heads into its Week 10 bye with a 5-4 mark and one half game behind the Dallas Cowboys in the NFC East.