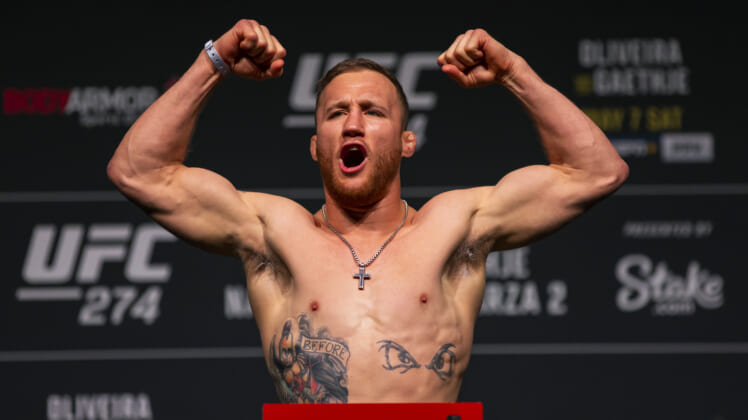 Justin Gaethje will have many people rooting for him to win in the main event of UFC 274 on Saturday night. But none may be rooter harder and louder than rap superstar Drake.

Drake is known for dropping down some big money on sports bets. The Toronto Raptors brand ambassador actually won a huge sum of money in April after placing a bunch of greenbacks on, of all things, the NFL Draft.

The man behind hit songs like “God’s Plan” and “Nice for What” won $225,000 when he bet that USC wide receiver Drake London would be the first pass-catcher taken in the 2022 NFL Draft. The Atlanta Falcons granted his wish with the eighth pick in the annual event.

Well, it seems that the music star has laid down another bold bet on this busy weekend that includes the Kentucky Derby, NBA Playoffs, and UFC action. On Saturday night, the MMA world leader returns with their pay-per-view event for May, UFC 274. The card is headlined by a matchup of two lightweight elites when champion Charles Oliveira and Justin Gaethje face off. Despite missing weight on Friday, and not being able to take the title home at the end of the night, Oliveira is the betting favorite on fight night. 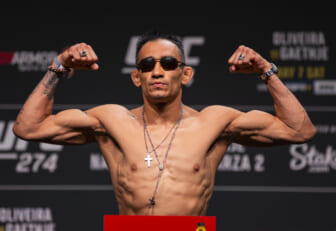 Drake seems to like those odds and placed a $425,000 bet on the underdog and former interim champion Gaethje. If he is victorious, the hip-hop megastar could win close to $1.4 million. A few hours before the bout, Oliveira was a -145 favorite with his opponent a +125 underdog (via DraftKings)

The UFC event on May 7 kicked off at 6 PM ET with early preliminary action on ESPN+. The main card pay-per-view for $74.99 begins at 10 PM ET exclusively on ESPN+.