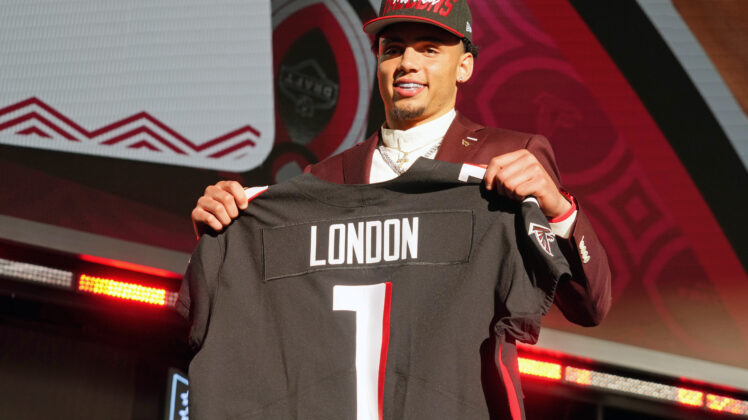 It seems that the Atlanta Falcons’ decision to make Drake London the first wide receiver selected in the 2022 NFL draft helped one of the most popular rappers in the world win over $200,000.

Before NFL teams hit their draft war rooms and prepared to make their first selections in this year’s edition of the annual event, hip-hop superstar Drake actually put down a $100K bet on a top prospect that shared his name. That being USC wide receiver Drake London. The wager was for which pass-catcher would be taken first in this year’s draft.

The move was a risky one for the man who has sold over 170 million records worldwide. For many draft experts, Ohio State wideout Garrett Wilson was believed to be the best player at his position in this year’s class. Luckily for Drake, the Atlanta Falcons didn’t see it that way after doing all their pre-draft scouting and evaluations.

After seven other teams made their picks in the NFL Draft, the Falcons handed in their selection card and NFL commissioner Roger Goodell would announce that with the eighth pick the team did not select Wilson, but instead went with Drake London.

Wilson would end up being selected two picks later by the New York Jets.

Following the pick, the “Champagne Papi” took to his Instagram account to show off a screenshot of the bet that earned him $225,000, and captioned the image by writing, “Drake betting on Drake just feels right.”

Word of the Toronto Raptors’ global ambassador’s massive bet and even bigger win got back to the new Falcons player, and he was asked about it after being chosen by Atlanta. The bet itself wasn’t actually news to him, and he revealed his friends were even more excited about Drake betting on him than he was.

“My friends were hitting my phone saying Champagne Papi bet on me,” London joked during his post-draft press conference. “So, I thought that was funny.”

It’s unclear if the author of popular songs like “Toosie Slide” and “God’s Plan” is a favorite of London’s, but the Falcons are surely now a favorite team of Drake’s after the first night of the 2022 NFL Draft.