Donovan Mitchell trade to the New York Knicks: How it might look 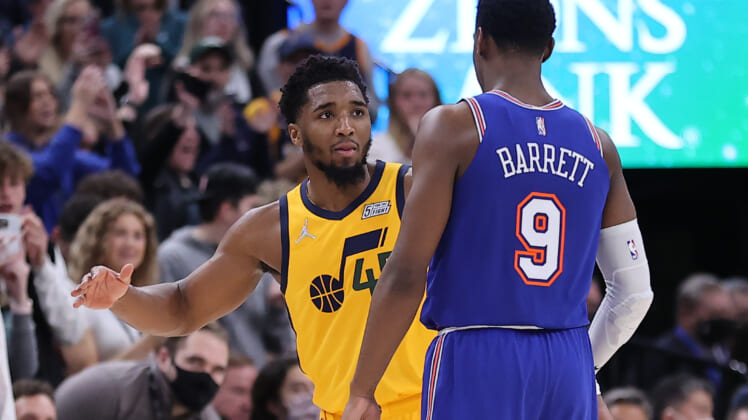 There’s been a ton of talk about a potential Donovan Mitchell trade from the Utah Jazz to the New York Knicks leading into the offseason.

Utah is coming off yet another premature playoff exit, leading to questions about whether it will break up to the All-Star duo of Mitchell and Rudy Gobert. This comes on the heels with continued reports that there’s a rift between the two All-Stars.

While it’s highly likely that general manager Justin Zanik would rather trade Gobert than Mitchell, the latter has been the subject to rumors. That isn’t dying down with the Knicks continued to be linked to the high-scoring 25-year-old guard.

“As for where Mitchell could possibly end up if he was to leave the Utah Jazz, the New York Knicks have been a heavily speculated landing spot for him and there is a level of mutual interest that exists between the two sides.”

Knicks front office head Leon Rose could very well look to construct a major move like this after a disappointing 2021-22 season. New York also has the assets to make it happen.

One season after earning a surprise playoff appearance, the Knicks posted a 37-45 record and missed out on the play-in tournament completely.

Sure there’s been some talk that New York would rather get younger than blowing up its roster for a star player. But with Tom Thibodeau set to return for a third season in the Big Apple, that just doesn’t seem likely.

Below, we look at how a Donovan Mitchell trade to the New York Knicks might look with two different hypothetical scenarios.

It’s difficult to gauge how much a Mitchell trade would cost an in acquiring team. It’s rare that a 25-year-old player of his ilk hits the trade market. We’d likely have to look at back in July of 2019 when a then 26-year-old Anthony Davis was dealt from the New Orleans Pelicans to the Los Angeles Lakers.

The parameters of the hypothetical Donovan Mitchell trade here would be pretty similar. Utah acquires stud young wing RJ Barrett, who is coming off a tremendous 2021-22 campaign.

Still only 21 years old, Barrett could act as an important building block for Utah moving forward. The Jazz also pick up the No. 8 pick in the 2020 NBA Draft, forward Obi Toppin. While he has not done a whole lot in two seasons, there’s a lot of upside. By adding two future unprotected first-round picks, including a lottery selection in 2022, these Jazz expedite their retooling process.

From New York’s perspective, the idea here would be to team Mitchell up with Julius Randle rather than moving the latter after a down season. The Knicks would still have the contracts of Derrick Rose, Alex Burks and Nerlens Noel to pair with other draft capital to find a third star during the summer.

These contracts coupled with other first-round picks could land the Knicks another fringe star to team up with Mitchell and Randle. Given their cap situation, this might be the best scenario for the organization.

This remains the likeliest scenario if Mitchell is going to head to the Big Apple. Getting a third team to help facilitate a trade. It opens up more possibilities for the Jazz, including acquiring players that can help them remain in contention. It also creates more possibilities for an extended blockbuster trade.

Hypothetically, it might make sense for New Orleans to move off Williamson rather than paying him a huge extension after three injury-plagued seasons to open his career. The team just earned a surprising playoff appearance with C.J. McCollum and Brandon Ingram leading the charge. Why not look to build around those two with solid youngsters from New York in a three-team deal? Imagine how RJ Barrett would look among the group.

This would be an absolute blockbuster. It’s highly unlikely. However, it is also what the paramaters of a three-team Donovan Mitchell trade to the Knicks would look like.

Utah gets a potential franchise cornerstone in Williamson who was seen as a generational talent coming out of Duke. Despite his injury issues, the forward is averaging 25.7 points and 7.0 rebounds in 85 career games. The Jazz could then move off Gobert for other pieces as they initiate a rebuild centered around Zion.

New Orleans acquires Barrett and a potential point guard of the future in Quickley to team up with C.J. McCollum and Brandon Ingram. That’s a top-five team in the Western Conference with more ability to upgrade the roster.