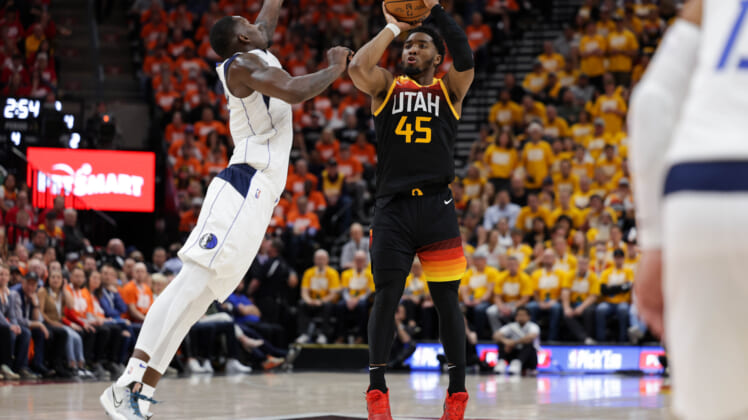 We’ve heard continued rumors about a potential Donovan Mitchell trade from the Utah Jazz with the New York Knicks bandied about as a potential landing spot.

Mired in a difficult first-round NBA Playoff matchup against the Dallas Mavericks, there’s a chance that the Jazz could break up their star duo. For the most part, the focus has been on Utah potentially trading Rudy Gobert. There’s still a reported rift between Gobert and Mitchell. Another premature playoff exit will add another layer to these rumors.

“Some prominent members of the Jazz were surprised and upset to see Wesley sitting courtside for the game, per SNY sources.

Will anything tangible come from Wesley’s presence – and the Jazz reaction to it? That’s obviously impossible to know at this point. But it’s intriguing to note New York enters the initial stages of a pivotal offseason.”

Report from Ian Begley of SNY

Utah might ask the NBA to look into tampering here. But that’s going to be hard to prove given that Wesley has not spoken directly about Donovan Mitchell trade rumors.

All of this comes with New York linked the most to Mitchell as the team heads into what’s going to be an important offseason.

For his part, Mitchell might have saved the Jazz’ season with a late field goal in Game 4’s must-win over the Mavericks on Saturday. The first-round series is tied at two with Game 5 in Dallas Monday evening.

What to make of Donovan Mitchell trade rumors?

Dating back to March of 2020, there’s been a reported rift between Mitchell and Gobert. It started with the latter testing positive for COVID-19 and giving it to his teammate — ultimately leading to the 2019-20 season being suspended.

“Gobert and Mitchell have been at each other’s… I don’t know if I can say at each other’s throats. It’s back to being passively aggressively awkward. It’s the most underplayed story in the league, I think.

The Jazz are struggling a lot. This team had big expectations and they’re getting passed by frankly. They are not on the level they were a year ago. Donovan and Gobert, even though they’re both under long-term contract, are under each other’s skin. There’s all kind of subtweeting and passive aggressive stuff going on.”

Despite Mitchell’s brilliant play since joining the Jazz as a first-round pick back in 2017, the team has not enjoyed playoff success. This is Utah’s fifth consecutive trip to the playoffs with Mitchell leading the charge. Unfortunately, it has not advanced past the conference semifinals during this span.

Still only 25 years old, Mitchell remains one of the best guards in the NBA. He’s a franchise cornerstone, leading many to believe that Utah wouldn’t move the three-time All-Star.

But as you likely already know, it might not be up the Jazz. We’ve seen other star players request trades in the past — ultimately seeing said requests granted.

The backdrop here as it relates to a potential Donovan Mitchell trade is the attractiveness of New York City as a much larger market than Salt Lake City.

As for the Knicks, they would have the assets to pull off a blockbuster of this ilk. That includes former lottery pick R.J. Barrett as well as all of their future first-round picks moving forward.