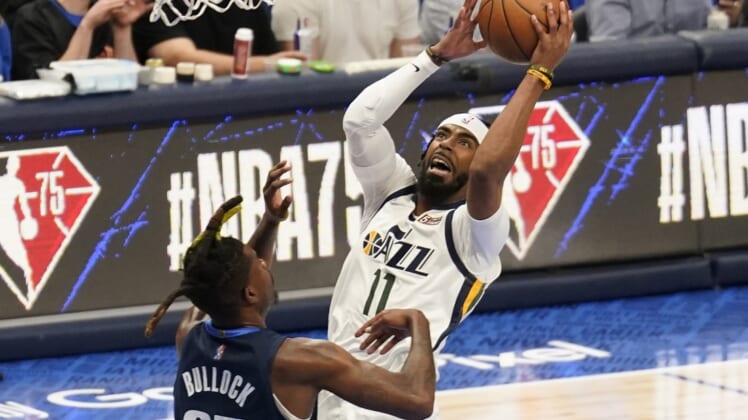 Donovan Mitchell scored 32 points after a rough start and Bojan Bogdanovic had 26 as the Utah Jazz took advantage of Luka Doncic’s absence to defeat the host Dallas Mavericks 99-93 in the opening game of their Western Conference first-round series Saturday afternoon.

Rudy Gobert grabbed 17 rebounds and blocked three shots to lead the defensive effort in this low-scoring contest for the Jazz, who took both a 1-0 lead and home-court advantage with the road win.

Mitchell had a rough overall game from the field, shooting 10-for-29, and only scored two points in the first half before exploding for 30 in the second half. He also had six rebounds and six assists. MIke Conley added 13 points, six rebounds and three assists for the Jazz.

Dallas played without its superstar, who was ruled out of Game 1 Saturday morning. Doncic suffered a left calf strain in the regular season finale Sunday against San Antonio. It’s uncertain whether he’ll be back for Game 2 on Monday.

Jalen Brunson scored 24 and Spencer Dinwiddie tossed in 22 for the Mavericks, who were limited offensively without their leading scorer. Reggie Bullock added 15 points and Dorian Finney-Smith had 14.

Utah, which struggled to put teams away after taking big leads this season, was up 86-75 in the fourth quarter when Dallas made a final push — mostly from the free-throw line. The Mavs pulled within one with 2:12 left after a Max Kleber 3-pointer capped a 16-6 surge.

Kleber had a chance to put Dallas ahead but missed from beyond the arc on the next possession.

Royce O’Neal then had a big possession for the Jazz, hauling in his own missed shot and then nailing a 3-pointer for a 95-91 lead with 56.2 remaining. Mitchell added some free throws and Utah’s defense fended off the Mavs’ final comeback effort.

Jordan Clarkson and Bogdanovic sparked the Jazz’s second-quarter resurgence, which was capped off by a 13-2 run heading into halftime. Bogdanovic had 20 points, including a last-second 3 to put the Jazz up 45-43, and Clarkson scored 10 in the first half.

Mitchell came alive in the third quarter, scoring the first two buckets out of the locker room en route to a 19-point outburst.

Utah outrebounded Dallas 53-34 and shot 43.4 percent from the field compared to just 38.2 percent for the Mavericks.