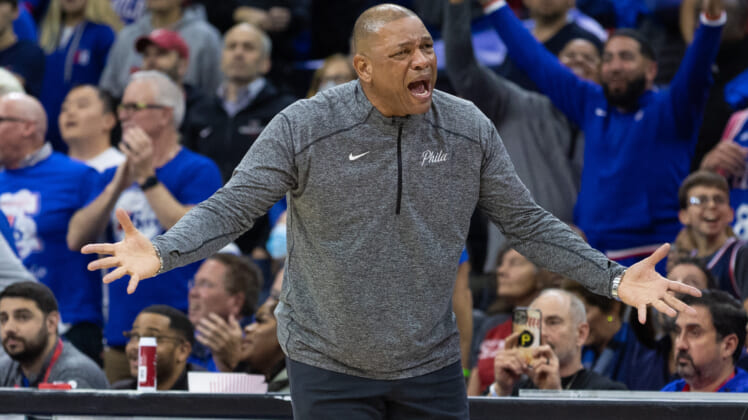 Doc Rivers and the Philadelphia 76ers headed into Game 5 of their Eastern Conference Semifinals series against the Miami Heat riding a high.

Philadelphia was coming off two consecutive home wins to tie the series at two. James Harden put up an electrifying performance in Game 4 to help even the series.

The hope was that these 76ers might be able to ride Joel Embiid and Harden to a Game 5 win in South Beach to a 3-2 series lead.

Throughout the game, that was the furthest thing from actually taking place inside FTX Arena. The 76ers’ two stars laid a complete egg in what ended up being an humiliating 120-85 loss to the Heat and a 3-2 deficit in the best-of-seven.

The two combined to shoot 12-of-25 from the field with 31 points. Philadelphia also finished a combined minus-58 with the two on the court. Sure Embiid looked nothing like himself after being hit in the head in the first quarter. But there’s large-scale concerns in Philly.

In the process, Doc Rivers and Co. were not able to take advantage of starting Heat point guard Kyle Lowry missing the game and Miami’s season leading scorer Tyler herro scoring all of 10 points.

Now down 3-2 in the series heading into Game 6 in Philadelphia Thursday evening, the 76ers’ season is on the brink. With this comes a more concrete feeling that Rivers’ tenure in the City of Brotherly Love could very well come to an end after just two seasons.

Doc Rivers’ playoff failures are now under a microscope

Rivers has manned an NBA sideline as a head coach each season from 1999-2000 to now. His tenure started with the Orlando Magic back in 1999 and topped out in helping the Boston Celtics to the NBA title following the 2007-08 season.

Nothing we’ve seen from Rivers since he left Boston after the 2012-13 season to join the Clippers has given us confidence that the longtime head coach can have sustained success in the playoffs.

Since his debut season in Southern California, Rivers has led his teams to eight playoff appearances — only to fail to make the conference finals each time.

It’s a shocking realization to come to. Twenty-plus seasons as a head coach with one NBA title and two Finals appearances. Just look at who Rivers has had to work with during this span.

We’re talking about multiple current Hall of Famers with about another six set to join the list once they retire. That lack of postseason success with Doc Rivers calling the shots is eye-opening.

After Philadelphia took a 3-0 series lead over Toronto in the first round, the team went on to lose two consecutive before being able to end the series in six and clinch second-round matchup against Miami.

Ahead of that Game 6 outing late last month, Rivers discussed his playoff failures. In responding a point that he’s the only head coach in NBA history to preside over more than one series loss after taking a 3-1 lead in a best-of-seven, the head coach seemed to blame others.

“Well, it’s easy to use me as an example. But I wish y’all would tell the whole story with me. All right?”

The whole story? Back in 2003, his eighth-seeded Orlando Magic team held a 3-1 lead against the eventual NBA champion Detroit Pistons before losing those final three games.

In 2015, the Los Angeles Clippers held a 3-1 lead against the Houston Rockets in the Western Conference Semifinals. Chris Paul suffered an injury and missed two outings. The Clips then lost three consecutive to drop the series.

Rivers also points to the Clippers blowing a 3-1 lead to the Denver Nuggets in the Orlando Bubble after the 2019-20 season was postponed due to COVID-19.

“That’s the one I took. We blew that. And that was in the bubble. And anything can happen in the bubble. There’s no home court. Game 7 would have been in LA.”

What’s to stop Rivers from blaming the Joel Embiid injury that cost him the first two games of the Heat series? Perhaps, he’ll pass the buck and blame the Ben Simmons drama from the regular-season or James Harden’s struggles after being acquired for Simmons back on February 10.

None of this is to say that Rivers-led teams have not faced their hurdles during the playoffs. They have. Other teams have, too, during that span. It’s what the NBA Playoffs are all about.

Doc Rivers has been on the hot seat all season

ESPN’s Stephen A. Smith reported recently that Rivers could be on the hot seat if Philadelphia suffers the same playoff results as his former Clippers teams.

That came after his colleague, ESPN’s Adrian Wojnarowski, reported that the Los Angeles Lakers were waiting to see if Rivers becomes available to hire a replacement for the recently-fired Frank Vogel.

What we’ve heard from star center Joel Embiid during the playoffs is any indication, there could certainly be trouble brewing in the City of Brotherly Love.

“I’ve been saying all season since he got here, (Harden) needs to be aggressive and he needs to be himself.

“That’s not really my job, that’s probably on coach to talk to him and tell him to take more shots. Especially if they’re going to guard me the way they’ve been guarding. But that’s really not my job.”

In order for rumors about Rivers’ short-lived future in Philadelphia not to become reality, his 76ers likely need to win two consecutive games and punch their ticket to the Eastern Conference Finals.

That seems unlikely following Tuesday’s humiliating loss to the Heat. Rivers could be out of excuses. And even with Embiid likely operating at 70%, this excuses will fall on deaf ears when it comes to the 76ers’ brass.