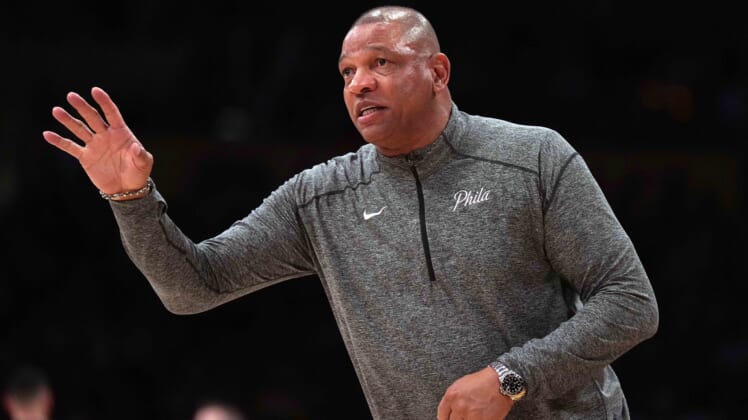 Two years after winning the NBA Finals, the Los Angeles Lakers fired head coach Frank Vogel after missing the playoffs entirely this past season. As they search for a new leader, they could be biding their time, waiting to see if either Doc Rivers or Quin Snyder go free instead.

Both coaches are coming off playoff appearances, something the Lakers would like to achieve yet again next season. Better yet, it’s probably an expectation for any incoming coach looking to run the Lake show.

Lakers are in no rush to hire current interview candidates

Currently some of the candidates linked to the Lakers include Adrian Griffin, Darvin Ham, Terry Stotts, Mark Jackson, and Scott Brooks. Of all the names mentioned, Snyder and Rivers have the most recent experience.

As the Sacramento Kings are apparently nearing their head coaching decision, expected to come by the end of the week, the Lakers continue to be patient.

The biggest question continues to be whether either coach will even be available.

Which might be why the Lakers are in no rush to make a final decision.

Quin Snyder, Doc Rivers may be who Lakers are waiting for

Snyder, who helped the Jazz reach the playoffs in each of the past six seasons, might become available if the team decides to go in a new direction after getting eliminated in the first round of the NBA Playoffs for the third time in the past four seasons.

The same is true for Rivers and the 76ers. With a bonafide MVP candidate in Joel Embiid, some feel the team hasn’t lived up the standard expected from having one of the best players in the NBA on the roster. Also getting kicked out in the first round, there’s some thought either Rivers or the 76ers might want to try something new next year.

If either Snyder or Rivers become available, the Lakers are expected to be first in line for their services according to Marc Stein.

Coaching the Lakers may be the most high-profile job in basketball. It makes sense for the organization to wait and see who the full interview candidate pool will consist of before jumping on one of the currently available coaches.

You never know, if they wait long enough, L.A. just might be able to come away with one of the more respected coaches in basketball. First, they’d have to be let go, which is no sure thing. In any event, the Lakers better continue vetting the candidates they already know.