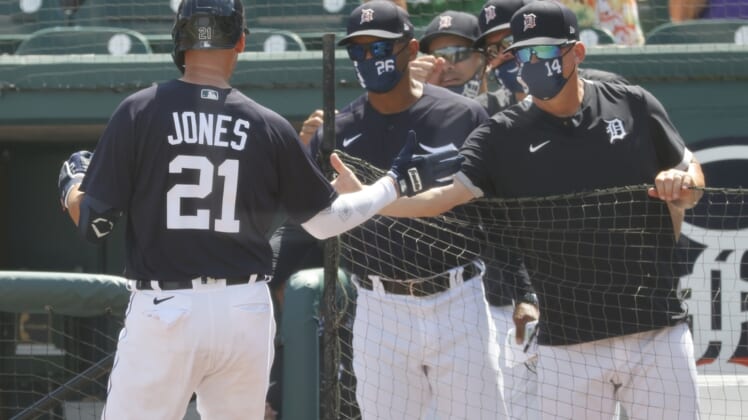 AJ Hinch couldn’t go to the ballpark last season, and it had nothing to do with the COVID-19 pandemic.

The former Houston Astros manager served a year-long suspension in the aftermath of that organization’s sign-stealing scandal. The downtrodden Detroit Tigers hired Hinch once his suspension ended last fall to help turn around their fortunes.

Detroit has endured a lengthy rebuild, piling up four consecutive losing seasons. The Tigers, who open this season at home against Cleveland on Thursday, are hopeful of ending that streak with Hinch at the helm.

Hinch believes the young players that GM Al Avila has drafted or acquired in recent seasons are ready to blossom.

“We have a really good farm system,” Hinch said. “It’s validated when you’re around these guys, and I look forward to the future. … There’s a great hunger to be better and provide a better product and to win games.”

Detroit chose not to make any bold moves during the offseason. The Tigers brought in some veterans such as catcher Wilson Ramos and outfielders Robbie Grossman and Nomar Mazara, along with re-signing second baseman Jonathan Schoop.

Miguel Cabrera remains entrenched in the middle of the lineup. He’ll play first base on Thursday after serving as the designated hitter in recent seasons.

“I think he gives us the best chance to win at first base,” Hinch said.

The starting rotation has some lively young arms, including Casey Mize and Tarik Skubal, both of whom got experience during last year’s abbreviated campaign.

“It’s an honor. It’s not something I take lightly,” Boyd said of the Opening Day nod. “I think it’s really exciting that when we get back, it will be our first game back with fans at Comerica. As you know, it’s so special on Opening Day at Comerica Park. It’s a state holiday.”

Cleveland will counter with last season’s American League Cy Young Award winner, Shane Bieber. In 12 starts, Bieber compiled an 8-1 record with a 1.63 ERA and 0.87 WHIP. He recorded two of those victories at the Tigers’ expense. In six games (six starts) vs. Detroit, he is 5-1 with a 2.13 ERA.

“His breaking ball was swing-and-miss all day,” manager Terry Francona said. “His velocity was good. … I think he’s ready to go.”

Bieber is challenging himself to be a workhorse this season. In seven of his 12 outings last season, he pitched six innings or fewer.

“That’s a focus of mine at all times,” Bieber said. “Maybe it got a little bit away from me at points last year. I feel like that’s still something I’m capable of doing, going out there and challenging hitters and putting myself in a good spot to go deep in ballgames and save some arms in the pen.”

Fearing they would be unable to retain him after this season, the Indians traded away star shortstop Francisco Lindor to the New York Mets. One of the players they acquired, 22-year-old Andres Gimenez, will replace Lindor at that spot.