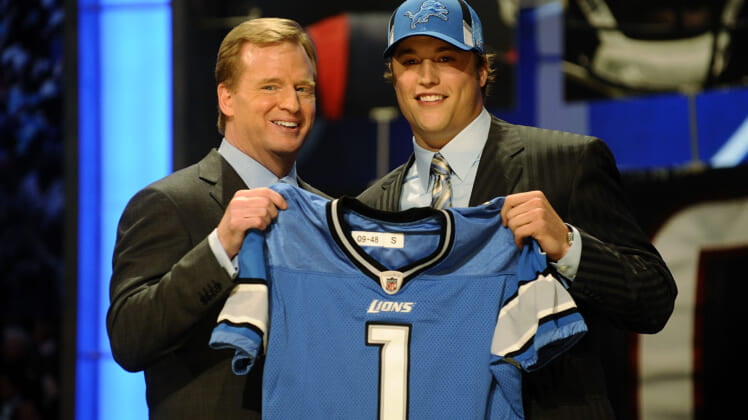 A wholesale restart for the Lions now includes quarterback Jared Goff, who was officially traded to Detroit for Matthew Stafford.

Stafford went to the Los Angeles Rams in exchange for three draft picks — a third-round selection this year and first-round picks in 2022 and 2023 — ending a run with the Lions that began as the No. 1 pick in the 2009 draft.

Detroit posted a farewell to the longtime linchpin on Wednesday night.

“As the quarterback, as the guy that’s at arguably the most important position on the field, if you’re in a place that you’re not wanted and they want to move on from you, the feeling’s mutual,” Goff told the Los Angeles Times after the trade was agreed upon prior to the Super Bowl. “You don’t want to be in the wrong place. It became increasingly clear that was the case. (The trade) is something that I’m hopeful is going to be so good for my career.”

The Lions are being reshaped from the top after another fruitless season left the franchise without a playoff win since 1991. Stafford was 0-3 in three playoff appearances, all wild-card losses.

Goff, 26, said he is trying not to let the “sour” ending with head coach Sean McVay spoil the big games and big production they shared in winning the NFC West twice and reaching Super Bowl LIII.

When he talked to the new decision-makers in Detroit, general manager Brad Holmes and head coach Dan Campbell, about the pending trade, Goff said he had a revelation.

“(Talking to the Lions) is what made me go, ‘Oh my God, this is how it’s supposed to feel,'” Goff told the Times.

Stafford, 33, has two years remaining on his existing contract and reportedly discussed a new deal with the Rams.

There is some question about the Lions’ commitment to Goff. Holmes has been closely studying the 2021 quarterback class and said he’s intrigued by the options potentially available to the Lions in the first round.

Holmes and his old boss, Rams general manager Les Snead, hooked up on a second trade this week, landing defensive tackle Michael Brockers in Detroit for a seventh-round pick in 2023. Brockers is owed $8 million in 2021 as part of a three-year, $24 million deal signed last spring.

Detroit also announced on Wednesday the team has signed Romeo Okwara to a contract extension. Okwara had 10.0 sacks in 2020.