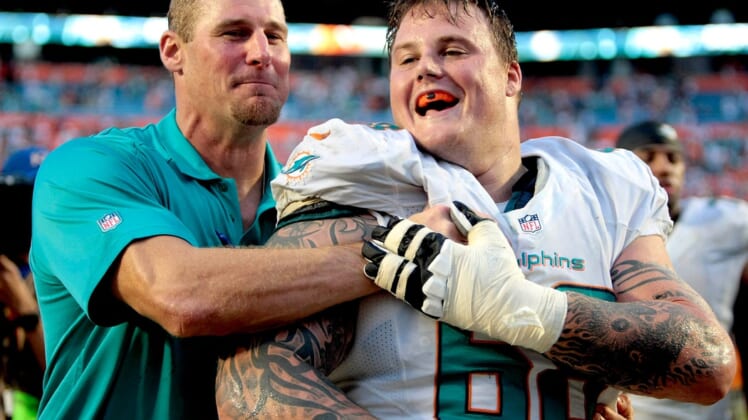 There’s a fine line between motivator and madman — but that doesn’t seem to apply to new Detroit Lions head coach Dan Campbell, who absolutely crushed his introductory press conference on Thursday.

Campbell punctuated his presser with a strange soliloquy about eating kneecaps as a means of establishing a physical team identity, and it must be header to be believed.

The recent New Orleans Saints assistant didn’t waste any time in setting the tone in an extremely unique way upon first meeting with the Detroit media. Footage of Campbell’s oratory masterpiece was captured by SportsCenter:

Ultimately, Campbell used the kneecap-eating metaphor to underscore his point about the Lions being the last team standing at the end of a game. He wants to make Detroit a proud franchise that reflects the blue-collar mentality of the Motor City.

Look at how much the Lions are loving this guy, already providing Campbell with an affectionate nickname on his office nameplate:

After this press conference, it’s easy to see why Campbell was hired if the end goal is to instill that hard-nosed paradigm into the fabric of the organization.

Is Dan Campbell crazy or brilliant — and can he turn the Detroit Lions around?

Fair question. Setting aside the bizarre rhetoric Campbell resorted to in discussing his vision for the Lions on Thursday, he obviously presented himself well enough to new Detroit general manager Brad Holmes and the team’s coaching search committee to earn a six-year contract.

Such a long-term commitment will give Campbell ample time to put his stamp on the Lions. Holmes must have seen Campbell as a dynamic leader he could envision himself working alongside for more than half a decade.

Considering the GM just came over from the Los Angeles Rams and saw how venerated coach Sean McVay led that team, chances are, Holmes knows what a great head coach looks like, and concluded Campbell was the best among the candidates the Lions met with.

While Campbell won’t exactly be the most highly regarded or celebrated hire on the coaching carousel this offseason, if introductory press conferences are any indication, he’s going to be a home-run hire for Detroit.