The one lone woman that has not settled out of court with Cleveland Browns quarterback Deshaun Watson after accusing him of sexual assault recently explained her decision in a new essay that blasts the star QB for his lack of sincere remorse for his alleged actions.

The biggest news story on Thursday was the NFL and NFLPA agreeing on new terms for what Deshaun Watson’s suspension will be for the 2022 season. Originally, after being accused of sexual assault by 30 women while a member of the Texans roster, Judge Sue L. Robinson ruled in July hearings that a six-game ban was the proper punishment. Based on the precedent set in previous player rulings on the issues of violent and non-violent assault.

Related: NFL games today – Watch times and odds for the next round of preseason matchups

Yesterday, that suspension was extended until Week 11, Watson was fined a record $5 million, and he was ordered to undergo counseling. While the 26-year-old has apologized publicly to those affected by his situation, he hasn’t truly shown remorse for his alleged actions. And following the news of his new suspension, Watson continued to try to maintain his innocence despite agreeing to settlements with all but one of his accusers.

Watson maintaining what happened between him and 30 massage therapists a couple of years ago was consensual is a major problem for Lauren Baxley, the only woman that has not reached a settlement with the three-time Pro Bowler.

In a written essay on Friday for the Daily Beast, Baxley explained why she has not settled with the QB and why Judge Sue L. Robinson deciding that her accusations of sexual assault were non-violent is wrong. 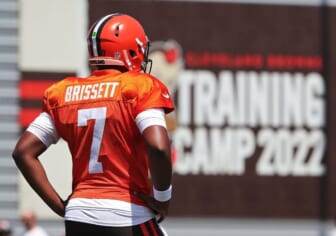 Watson will make his Cleveland Browns debut in Week 12 with a matchup against his former team the Texans, in Houston. The game is sure to be a highly emotional media circus and a difficult piece of theatre when sports meets harsh reality.