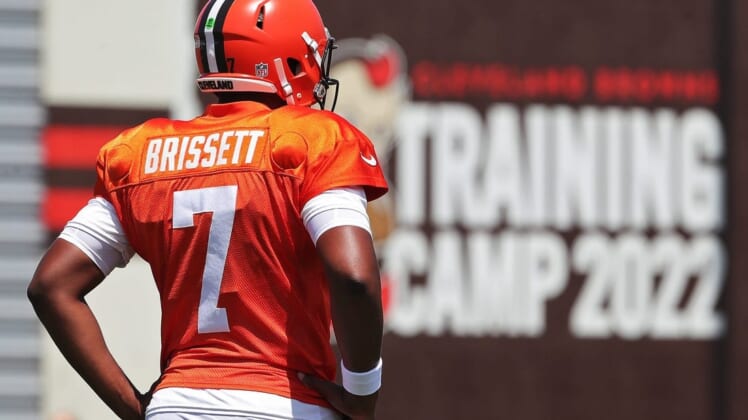 Closure in Cleveland has been a matter of perspective, but Browns backup quarterback Jacoby Brissett kept his eyes focused on the same plan: Be ready when your number is called.

Deshaun Watson’s 11-game suspension means the Browns will have Brissett under center into December.

“We have a plan, and we’re going along with the plan,” Brissett said on Friday.

Brissett, 29, learned Thursday along with the rest of the league how long Watson would be sidelined by a league suspension for violating the personal-conduct policy.

“Since I’ve been in this league it’s been the next man up,” Brissett said. “That was the case my rookie year, so that experience helps with not only the playing but with the mindset of understanding that you’ve got to be ready whenever your number is called.”

Though he hasn’t debuted this preseason and could be kept on the sideline to preserve the depth chart, Brissett said he’s using practices and scrimmages to get more comfortable with the offense.

“I use these practices as my game,” Brissett said.

Brissett brings a wealth of starting experience from his stints with the New England Patriots, Indianapolis Colts and Miami Dolphins. Behind him is former first-round pick Josh Rosen, and the Browns still could add an arm during Watson’s suspension.

Watson is first eligible to return to the Browns on Nov. 28.

Brissett started five games last year as Tua Tagovailoa’s backup in Miami and made 30 total starts with the Colts from 2017-20.

“He has a very good way about him,” Browns coach Kevin Stefanski said. “Very, very intelligent. Very good leader. Has the ability to make plays on the practice field, help in the meeting room. Be accountable throughout the weight room. He just does all the right things.”