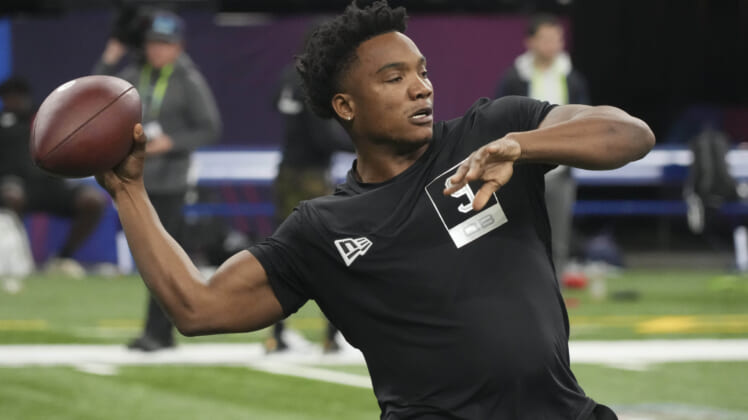 While college football star D’Eriq King might not be a top pick in the 2022 NFL Draft, teams are reportedly interested in the former quarterback for a unique role at the next level.

King emerged as a sensation early in his collegiate career with the Houston Cougars. He broke out in the 2018 season, posting a 167.0 QB rating with a stellar 36-6 TD-INT ratio and earned second-team All-ACC honors.

A knee injury late in 2018 sidelined him for a majority of the following season, causing King to redshirt in 2019. He later transferred to the University of Miami, becoming the Hurricanes’ starting quarterback and finishing with a 23-5 TD-INT ratio and 152.7 QB rating. Unfortunately, he tore his ACL in Miami’s bowl game and the long recovery meant he barely saw the field in his final season.

While the 5-foot-9 athlete doesn’t have a future as an NFL quarterback, it seems coaches and scouts have a different role in mind.

According to Pro Football Network’s Tony Pauline, multiple teams already expressed interest in King as a slot receiver who could take snaps at quarterback inside the red zone. The Dallas Cowboys, Seattle Seahawks and Buffalo Bills are among the clubs interested in King.

King, who is recovering from season-ending shoulder surgery in October, didn’t get a chance to participate in athletic drills during the NFL Combine nor at the Miami Pro Day. However, he did put his arm talent on display for scouts and met with multiple teams.

Speaking to reports in Indianapolis, King detailed his training process and highlighted his willingness to do whatever it takes to earn a spot on an NFL roster.

When King signed with Houston as a four-star recruit in 2016, he posted a 4.69 40-yard dash time. Because of his size, slot receiver is the only position that really suits King at the next level. Fortunately, as NFL.com’s Lance Zierlein wrote, he possesses the traits to make it work.

“He’s well-built for a role as a slot but needs to train for better short-area quickness and route running. His ability to run RPO and zone-read packages could be enticing for teams looking to create as many options as possible for their offense.”

King’s most extensive time at wide receiver happened in his first two seasons at Houston. From 2016-’17, he hauled in 58 receptions for 492 receiving yards and six touchdowns.

If he lands on the right team with a creative offensive coordinator, there can definitely be a role for King in the NFL.