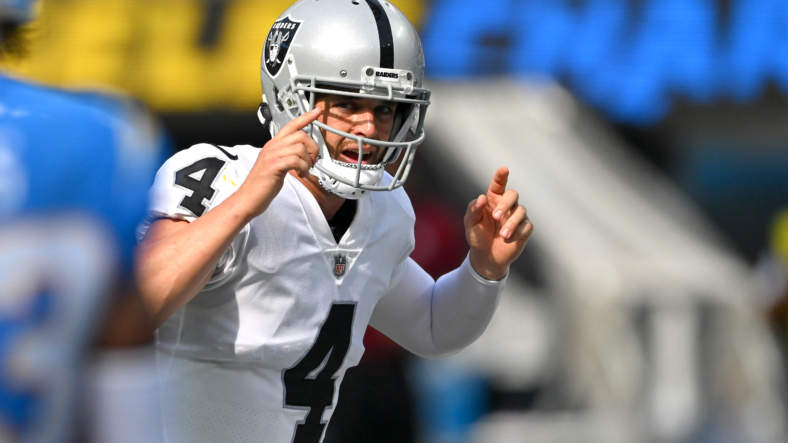 The Monday morning quarterbacks have all the answers, but Las Vegas Raiders quarterback Derek Carr detailed to reporters in his post-game press conference the exact Issues that resulted in his poor performance during a 24-19 loss to the Los Angeles Chargers in Week 1.

While Davante Adams and Darren Waller both filled up the box score and lived up to their huge contract extensions, the Raiders’ quarterback struggled. The veteran quarterback also took responsibility for the loss and knew exactly what needs to be fixed.

“I was way too aggressive. I came in with a very aggressive mindset, especially with all the weapons we have. That’s on me whenever I try to be too aggressive—force it to Waller down the middle, trying to bomb it to Tae, Hunter, trying to jam it in there to him. I mean just throw it away…I’ll be better about making too many aggressive decisions when I don’t have to. That’s really what it came down to is me forcing the ball to my guys in moments where I didn’t need to.”

Along with an I-can-make-every-throw mindset, Carr didn’t put enough oomph on some of his passes downfield, which resulted in a couple of interceptions. A day after the loss and reviewing the tape, head coach Josh McDaniels echoed his quarterback’s comments.

“The deep one to Tae was a little underthrown on that one. Same thing one down the middle to Waller. That was more of a decision of how to throw it than underthrown. We put more zip on that one as opposed to touch.”

Evaluating what went wrong for Derek Carr in Week 1

For the film junkies out there, Carr didn’t step into a few of his throws.

First, he must be mindful of his lower-body mechanics, but he may have felt a bit timid in a pocket with an offensive line group that lacked starting experience aside from left tackle Kolton Miller, who allowed two pressures including a sack Sunday, per Pro Football Focus.

Raider fans should hope that Carr just needs to tighten up on his technique and throwing velocity because the coaching staff continued to tinker with the offensive line Sunday, rotating rookie third-rounder Dylan Parham and Lester Cotton Sr. at right guard and Jermaine Eluemunor and rookie seventh-rounder Thayer Munford Jr. at right tackle.

If Carr truly believes that the four guys on the right side of the offensive line did a “solid job” as he said in Sunday’s postgame presser, then he just needs to set his feet and deliver an accurate ball as he’s done for most of his nine-year career.

Carr hasn’t had an issue with arm strength either. In previous years, we’ve seen him throw darts and hit receivers with tight spirals for big plays. Last season, he tied for ninth in intended air yards per pass attempt and tied for 11th in air yards per completion.

Last year, Carr made the same throws that didn’t have enough zip on Sunday.

Yes, Carr’s costly turnovers hurt the Raiders in Week 1, but that’s not the norm for him. He’s played in 128 NFL games and with Sunday included, the ninth-year pro has thrown three interceptions in a single game thrice, which hasn’t happened since Week 1 of the 2018 season when former head coach Jon Gruden took over.

Don’t use the excuse that Carr needed preseason action.

Before his last three-interception game under Gruden, Carr briefly played in two preseason games. Yet that didn’t help him in the 2018 season opener against the Los Angeles Rams.

On Sunday against the Chargers, Carr made poor decisions with the football and didn’t put the ball where it needed to be for his pass-catchers to make plays in crucial moments. Even for his biggest supporters, that’s OK to admit. He is human.

On the flip side, be careful about an overreaction to one contest. After his three-interception game in 2018, Carr completed 29 out of 32 passes for 288 yards and a touchdown against the Denver Broncos. Unfortunately, fresh off a Khalil Mack trade, the Raiders defense allowed 168 yards and two touchdowns on the ground in a 20-19 loss. It’s also worth noting the history of some other quarterbacks who struggled in Week 1 and then rebounded with MVP-caliber seasons.

Fast-forward to the present, fans should expect a much better performance from Carr in Week 2 against the Arizona Cardinals, who gave up 360 yards and five touchdowns through the air to Kansas City Chiefs quarterback Patrick Mahomes, who no longer has wideout Tyreek Hill. Former Raiders cornerback Trayvon Mullen didn’t play in that game because of a toe injury, but even if does suit up this week, Vegas should have a more efficient passing attack as Carr adjusts his approach.

Carr has weaknesses in his ball security, limited mobility and (at times) a poor feel for pressure in the pocket, but his tendency to get rid of the ball, take what the defense gives him on shorter throws and arm strength haven’t come up as problem areas as it did Sunday.

While Carr isn’t an elite quarterback and has clear imperfections, he’s far better than what we saw against the Chargers. If you bought stock in him because of his growing rapport with tight end Darren Waller and wideout Hunter Renfrow along with the addition of Adams, who caught 10 passes for 141 yards and a touchdown in Week 1, don’t sell your shares yet.

When fans go through an entire offseason, they’re prone to overreact to the result of the first game (good or bad). At this point, we know who Carr is as a quarterback, and he’s not one to throw a ton of interceptions and complete fewer than 60 percent of his passes.

Though Carr struggles to utilize his athleticism in the form of mobility and has a bad habit of losing the football in a crowded pocket, he’s displayed a lot more good than bad in his overall performances. Bad quarterbacks don’t survive three head-coaching changes.

Carr’s Sunday showing will go into the books as an aberration. Flaws and all, he’s primed for a bounce-back outing against the Cardinals.