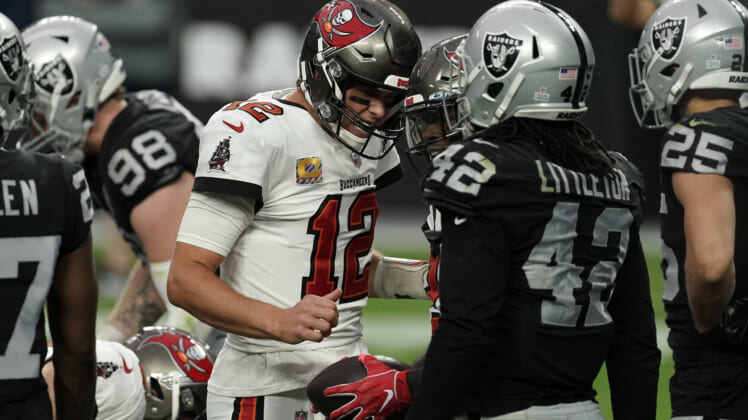 Seven-time Super Bowl champion Tom Brady had his sights set on becoming a Las Vegas Raider after departing from the New England Patriots in the 2020 offseason, following the storied franchise offering Brady a number, which he declined, according to the Boston Globe.

Per NBC Sports Boston, “a tangible effort by the Patriots to keep Tom Brady in New England never happened. No negotiation. Just the intimation that it was on Brady to say what he wanted. For Brady, that stance spoke volumes.”

During the broadcast of UFC 278 on Saturday night, the recently retired Rob Gronkowski asked White to share what went wrong with the recruiting pitch that he gave Brady, who we now know signed with the Tampa Bay Buccaneers.

“I worked to put that deal together for Brady and Gronk to come to the Raiders. And it was almost a done deal. And at the last minute, Gruden blew the deal up and said that he didn’t want them. And all hell broke loose, man. It was crazy.”

“Brady was already looking at houses, and it wasn’t being said yet that Gronk was coming. So Las Vegas would have had Brady and Gronk the year that the [Buccaneers] won the Super Bowl, except Gruden blew the deal up. And there’s so much story that goes along with this behind the scenes. And I was never going to tell that story until Gronk just said it.”

Gronk would add, and “Dana, that is exactly what happened.”

The deal took place in early 2020 when Brady, then six-time Super Bowl winner with the New England Patriots, entered free agency with one eye on his eventual departure. Gronkowski was under contract with the Patriots at the time, even though he had been retired for one year.

As the story began to make the rounds on Saturday night, fans connected it with a quick tale that Brady told on HBO’s The Shop in June of this year.

Brady said he felt an interest and the team was snubbing him, “and they weren’t interested in the end.” He never mentioned the team by name and questioned the organization’s decision to keep the quarterback they had instead of signing Brady.

“You’re sticking with that motherf***er?” Brady said on The Shop, according to Warren Sharp.

The two franchises played eachother that season and the Raiders would lose that game 45-20 dropping their record to 3-3 and the Bucs to 5-2 after seven games.

Brady would get the last laugh

Unfortunately for Gruden, it did not work out for him in the end. A little over a year later, he would have to resign as Raiders coach.

After reports surfaced detailing the use of racist, homophobic and misogynistic terms used by Gruden in emails uncovered in connection with 650,000 of these were gathered during the league’s investigation into the Washington franchise. Gruden is seeking damages after his resignation.

“I have resigned as head coach of the Las Vegas Raiders,” Gruden said in a statement, obtained by NFL Network Insider Ian Rapoport. “I love the Raiders and do not want to be a distraction. Thank you to all the players, coaches, staff, and fans of Raider Nation. I’m sorry, I never meant to hurt anyone.”

Meanwhile, Tom Brady would lead the Buccaneers to their second Super Bowl in franchise history in 2021, beating the Chiefs 31-9. He would also surpass Michael Jordan, who he called “The real goat” [H/t Sportskeeda.com] for most rings won between the two.