The Denver Broncos are going to cast a wide net as they look to replace the recently-fired Nathaniel Hackett as the team’s head coach.

Hackett was fired just 15 games into his tenure following a humiliating loss to the Los Angeles Rams on Christmas Day.

For the new ownership group headed by Rob Walton and Greg Penner, it’s all about finding the right guy to lead an organization that has not earned a playoff spot since after the 2015 season.

It now looks like Denver is targeting a familiar face. According to NFL Media’s Ian Rapoport, the team has requested permission to interview current Dallas Cowboys defensive coordinator Dan Quinn.

Denver had interviewed Quinn during last year’s cycle. In fact, the former Atlanta Falcons Super Bowl head coach was a favorite to land the gig before general manager George Paton and Co. opted to go in another direction. Fast forward a year, and this could be a match made in heaven.

The embattled quarterback was asked about Denver’s search for a new head coach following Sunday’s season-ending win over the Los Angeles Chargers. In particular, George Stoia of the Denver Gazette brought up other candidates such as Sean Payton and Jim Harbaugh before the attention turned to Quinn.

“Dan Quinn, I know him personally, too. He’s an amazing coach as well, an amazing person, an amazing soul, great leader,” Wilson said.

Wilson and Quinn have a built-in relationship with one another dating back to their time together with the Seattle Seahawks. The latter acted as Seattle’s defensive coordinator in 2013 and 2014, Wilson’s second and third seasons with the team.

Now that Denver is looking to find the right mix for Wilson following a disastrous 2022 season for the future Hall of Fame quarterback and his team, Quinn makes sense. 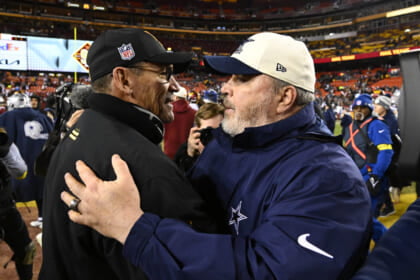 Of course, Denver is also setting its sights high after an ugly five-win performance. That includes engaging in conversations with the New Orleans Saints to acquire the aforementioned Sean Payton.

As for Quinn, he posted a 43-42 record in five-plus seasons as the Falcons’ head coach from 2015-20. That included an appearance in the Super Bowl following the 2016 campaign. He’s headed Dallas’ defense over the past two seasons, leading units that have finished in the top-seven each season.