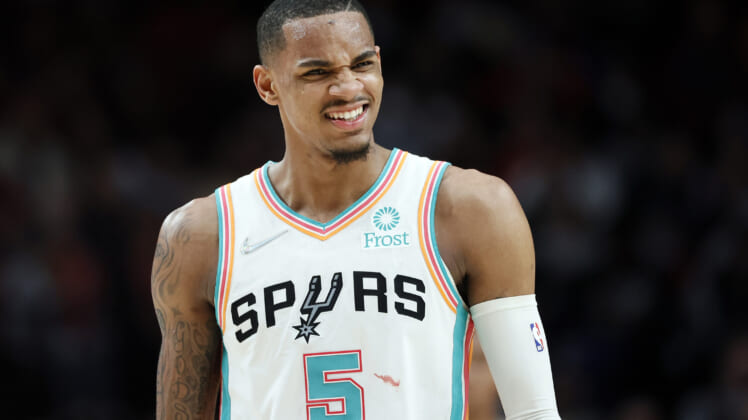 The blockbuster Dejounte Murray trade from the San Antonio Spurs has finally happened.

Rumors popped up ahead of last week’s NBA Draft that the All-Star point guard could potentially be on the move as San Antonio transitions to a full-scale rebuild.

We’re now getting more concrete reports on this. According to Shams Charania of The Athletic, Murray has been dealt from San Antonio to the Atlanta Hawks for the contract of Danilo Gallinari, three first-round picks and a future pick swap.

ESPN’s Adrian Wojnarowski adds that Atlanta is sending a 2023 first-round pick (from Charlotte), 2025 first-round pick and 2027 first-round selection as well as a 2026 pick swap for Dejounte Murray. It’s not yet known what type of protections are included.

San Antonio’s asking price in any deal was said to include four lightly-protected first-round picks or three first rounders and multiple pick swaps. Surprisingly, the team wasn’t interested in acquiring John Collins from the aforementioned Hawks. This seems to suggest that draft pick assets are the primary goal for general manager R.C. Buford and Co. after a third consecutive non-playoff season.

Atlanta’s interest in Murray was well-known. It has been talking to San Antonio for well over the past week and had the assets to offer up in terms of draft picks.

It’s not a secret that the Hawks are looking to retool behind star guard Trae Young. Apparently, Young and Murray also wanted to team up with one another. Atlanta now has one of the most-talented backcourts in the NBA today.

Fresh off an ugly first-roud exit at the hands of the Miami Heat, Atlanta needed to find someone to team up with Young in the backcourt. Hence, its initial interest in a Dejounte Murray trade. That’s now come to fruition in a blockbuster way.